'When I hear alien, I think of another planet,' said state senator Nilsa Cruz-Perez

A state senator in New Jersey wants to remove the term “illegal alien” from statutes to reduce prejudice against immigrants.

Senator Nilsa Cruz-Perez introduced Senate Bill 2599 which mandates the replacement of the terms “alien” and “illegal alien” with “foreign national” and “undocumented foreign national.” The prohibited terms would also be banned from use in future legislation.

“The words we use to describe individuals in statutes are extremely important due to the power they have to isolate and dehumanize communities,” Cruz-Perez said in a statement. “As a nation of immigrants, our laws should discontinue the use of terms that actively ostracize those in our country who may have been born elsewhere.”

The Democratic senator described immigration as a “contentious” issue and said “discontinuing use of the terms ‘alien’ and ‘illegal alien’” would create a “more welcoming environment for incoming foreign nationals and offer recognition of their personhood in the laws of this State.”

“When I hear alien, I think of another planet — that’s what we use that word for. Not people, just because they’re from another country,” Cruz-Perez told the New Jersey Monitor on June 14. “It’s important that they know they are welcome here.”

The outlet reported that more than 460,000 illegal aliens live in the Garden State and less than 30% pay taxes.

The American Immigration Council reported in August of 2020 that of the 2 million foreign-born individuals in New Jersey, 13% came from India, 10% from the Dominican Republic, 5% from Mexico, 4% from Ecuador, and 4% from the Philippines. The organization found that undocumented immigrants made up 22% of the total immigrant population and approximately 5% of the state population in 2016.

NJ.com also notes that “the New Jersey Law Revision Commission has proposed removing the word ‘inmate’ from state statutes and replacing it with ‘person who is incarcerated.’”

According to the bill, “alien” and “illegal alien” are forms of “offensive language” and encourage “the prejudice that has skewed discussions concerning immigration.”

The Biden administration ordered federal immigration enforcement agencies to stop using terms such as “illegal alien,” “undocumented,” and “assimilation” in April of 2021.

President Joe Biden said the order was part of an effort to build a more “humane” immigration system. The policy sent “a clear signal to a pair of law enforcement agencies — and their associated labor unions, which endorsed Trump’s presidential candidacy — that under the Biden administration, their approach must change,” reported The Washington Post.

Several prominent Republicans, including Senator Tom Cotton, opposed the administration’s order as an attempt to downplay the severity of the immigration crisis.

We use the term 'illegal alien' because they're here illegally.

This kind of weakness and obsession with political correctness is why we're having a crisis on the border in the first place. https://t.co/0YEL2oot3w

While Cruz-Perez introduced the policy in May, it was previously considered in 2016 and ultimately rejected

The prohibited term would only be permitted if a statute quotes or references another state’s policy. 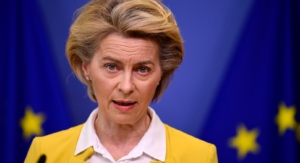