The executive branch of the European Union recommended granting membership to Ukraine.

As part of their announcement, the 27-nation bloc’s leadership warned the process would not necessarily move quickly.

“We recommend to give Ukraine the candidate status, on the understanding that the country will carry out a number of important reforms,” said President of the European Commission Ursula von der Leyen in a statement on June 17.

She said Ukraine had “clearly shown commitment to live up to European values and standards” and that it had “embarked, before the war, on its way towards the EU.”

E.U. officials have said Ukraine currently implements 70% of the alliance’s “rules, norms, and standards” but that improvement was needed regarding “the rule of law oligarchs, anti-corruption and fundamental rights,” per Fox News.

Olivér Várhelyi, the commissioner who oversees the bloc’s possible expansion, said “starting accession negotiations is further down the line.”

“Once conditions are met, then we will have to come back and reflect on it,” Várhelyi said in a statement. “This is not for today.”

Some E.U. members, including German Chancellor Olaf Scholz, have noted the process could take years.

Turkey applied for admission to the alliance in 1987, was granted candidate status in 1999, and began negotiating with the E.U. in 2005. The bloc took issue with alleged human rights violations and negotiations were suspended in 2016, per The Sun.

Croatia was the last nation to be admitted to the E.U. The process included six years of membership negotiations which were finalized in 2013. Even as a member, the country was not immediately a part of the Schengen space or the eurozone.

Russian President Vladimir Putin had asked the West to promise Ukraine would not be admitted to N.A.T.O. during talks with President Joe Biden prior to the invasion.

“Putin told Biden that Ukraine’s bid to join N.A.T.O. must be denied in return for assurances that Russian troops would not carry out an attack. Ukraine has sought acceptance into the alliance since 2002,” reports CNBC.

Russia regards the expansion of both N.A.T.O. and the E.U. as a threat to its national security.

When Finland and Sweden began exploring admission to the E.U., Putin warned their membership would “negatively” impact diplomacy between the countries. Finland shares a large land border with Russia.

“To be admitted, potential newcomers need to demonstrate that they meet standards on democratic principles and they must absorb about 80,000 pages of rules covering everything from trade and immigration to fertilizers and the rule of law,” reports ABC News.

Moldova and Georgia have also requested E.U. membership. While the commission recommended Moldova for membership, the organization found Georgia had not yet met a number of conditions and would be admitted after reforms were made. The E.U. cited concerns about the independence of the judicial system, political polarization, and corruption. 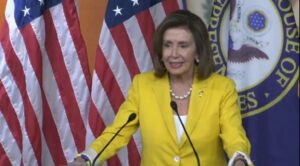