Netflix is now the first Hollywood studio to make COVID-19 vaccines mandatory for people working on their sets.

Members of casts and production teams in the United States, as well as those who come in contact with them, will have to provide proof of vaccination to work.

Deadline reports that the mandate applies to “everyone working in ‘Zone A,’ which consists of the actors and those who come in close proximity to them.”

Exceptions will be “rare” and limited to medical, religious or age reasons and possibly in a few cases for series and films that are already in production, according to the report.

“Producers will also have the option to implement mandatory vaccination policies for casts and crew in Zone A on a production-by-production basis. Additional changes, such as adjustments to testing frequency, are included for certain areas in the United States and Canada where COVID-19 incidence is, and remains, very low,” the union wrote of a tentative agreement on adjustments to their COVID-19 Safety Agreement on July 19.

The Union’s statement says that they first enacted the COVID-19 Safety Agreement in September 2020 after a months-long production shutdown in the business.

“The COVID-19 Safety Agreement is the outcome of unprecedented coordination and solidarity between the unions and collaboration with Employers to develop science-based protocols that minimize the risk of COVID-19 virus transmission in the industry’s unique work environments. Since that time, the protocols have driven a successful rebound of film and television production while prioritizing safety for casts, crews and all on-set workers,” the statement said.

Individual productions have also started issuing their own vaccination mandates.

Starz/UCP series Gaslit has also adopted a vaccine mandate after activist actor Sean Penn said that he would not return to work on the show until everyone on the production team was vaccinated. 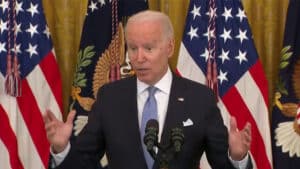 INVOLUNTARY INJECTIONS? Biden Says ‘I Don’t Know Yet’ About Mandatory Vaccines for the ‘Whole Country’