Nearly 4,000 Beagles Need Homes After Being Surrendered By Virginia Organization Breeding Them for Animal Testing

Nearly 4,000 beagles are in need of new homes after being surrendered by a research and breeding facility in Virginia.

The facility, owned by contract research organization Envigo, has been hit with 73 violations of the Animal Welfare Act and over 300 puppies died there from January through July of last year.

In March, the federal government seized 446 beagles that were in “acute distress” and placed a Temporary Restraining Order on Envigo to prevent the breeding, sale, or otherwise dealing of beagles at the Cumberland facility.

Three months later, Envigo announced that they are closing the facility because it would cost too much to raise the standard of care for the animals.

“The required investments to improve the facility and the lead time to achieve these improvements have recently increased. As a result, we have decided we will not be investing further in this facility, and it will be closed,” Robert Leasure, Jr., Inotiv’s President and Chief Executive Officer, said in a statement at the time. “We will implement an orderly closure plan. Cumberland comprises less than 1% of our total Inotiv revenue and has not contributed to profits in our Research Models and Services segment since the acquisition.”

Under an agreement between the Department of Justice and Envigo, ownership and physical custody of the dogs will be transferred to the Humane Society of the Unites States.

The HSUS has agreed that they will not photograph the conditions or the animals while they are rescuing them from the facility.

The agreement also states that Envigo will pay “a $100 fee per Beagle and a total of $150 fee per nursing mother and litter (below 8 weeks of age) to the HSUS at the time of transfer. HSUS agrees to pass the entirety of these fees to the respective Shelters. The Parties to the Transfer Plan agree that these fees are paid, and will be used, solely to help defray the costs to the Shelters of preparing the Beagles for adoption.”

Senator Mark Warner said in a statement that the transfer is the result of a warrant and subsequent lawsuit filed by federal authorities after he and Sen. Tim Kaine “shed light on the issue and demanded federal action.”

“After months of advocacy, we’re heartened to know that nearly 4,000 Envigo dogs will be spared a lifetime of suffering and will instead head to loving homes. We’re also pleased to know that Inotiv – Envigo’s parent company – will shutter its Cumberland facility and that no more dogs will be subject to the appalling conditions and inexcusable distress endured by so many dogs and puppies at the facility. We will continue working in the Senate to prevent the mistreatment of innocent animals across Virginia and the nation,” said the senators in a joint statement. 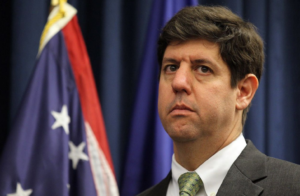