Although national average gas prices have declined since June, the average price per gallon may rise by spring, according to projections.

Gas prices will “probably be significantly cheaper” in 2023, though the average price could rise over $4 per gallon by May, according to CNN.

“[Next year] is not going to be a cakewalk for motorists. It could be expensive,” said head of petroleum analysis at GasBuddy, Patrick De Haan, in an exclusive statement to the outlet. “The national average could breach $4 a gallon as early as May – and that’s something that could last through much of the summer driving season.”

Gas prices will probably be significantly cheaper overall next year. Yet the national average could still climb back above the $4-a-gallon threshold as soon as May, according to GasBuddy projections shared exclusively with CNN. https://t.co/ZoEHdNCXg8

“Accurate forecasting [is] very challenging] as there is a “high level of uncertainty” in 2023, according to GasBuddy.

“Basically, curveballs coming from every direction,” De Haan said, describing the upswings in energy markets. “Extreme amounts of volatility. I don’t think we’ve ever seen such an amount of volatility as we saw this year.”

The United States Energy Information Administration (EIA) projected retail gas prices would average at $3.51 during 2023, according to a December projection.

Average gas prices trend higher during summer months as Americans typically travel in warmer weather which leads to a rise in demand. Prices are projected to reach $4.25 per gallon by August, though may return to current average prices by the end of next year, according to GasBuddy forecast.

Skyrocketing energy prices in 2022 have been attributed to the Russian invasion of Ukraine in February by the Biden administration. However, average gas prices had previously risen about a dollar in 2021 prior to the Ukrainian war, according to the EIA.

Prices have steadily lowered since peaking over $5 per gallon in June.

GasBuddy projected 2022 national average gas prices would be $3.41, though the outlet revised their projection to $3.99 per gallon following Russia’s invasion of Ukraine.

“The action I’m calling for will make a real difference over time,” Biden said at the time in a statement titled: “Actions to Lower Gas Prices at the Pump for American Families.”

“Working with our NATO Allies and our European partners and beyond that, we’re responding,” Biden said, attributing rising prices to Russian President Vladimir Putin. “I know how much it hurts … our family budgets, your family budgets to fill a tank — none of it should hinge on whether a dictator declares war.”

Current national average is $3.06 per gallon as of Tuesday. The highest recorded average gas price was $5.03 per gallon on June 16, 2022, according to GasBuddy. 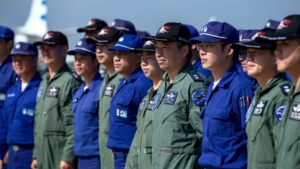