“Nasrin,” a new documentary film that was taped entirely in secret over the course of four years, sheds a never-before-seen light on the efforts of Iranian human rights activist and lawyer Nasrin Sotoudeh. Dubbed “the Nelson Mandela of Iran,” Sotoudeh is a figurehead for the struggle that people in the Islamic Republic of Iran endure for holding views or beliefs that do not align with the government.

Sotoudeh has been imprisoned multiple times — and endured self-imposed hunger strikes — as a result of her human rights work on behalf of religious minorities, activists opposed to the Iranian regime, and women who publicly protested Iran’s compulsory hijab law. She was awarded the annual Tribute for a Lawyer in 2018 and the twenty-third Ludovic-Trarieux International Human Rights Prize, the same honor bestowed on the imprisoned Nelson Mandela in 1986. More recently, Nasrin was arrested in June 2018 and in March of the following year, she was sentenced to 38 years in prison and 148 lashes for a crime for which the government provided no explanation. It was subsequently revealed in the Iranian Students’ News Agency that hard-liner Iranian judge, Mohammad Moghiseh, ruled that Sotoudeh had been sentenced for an illegal assembly and collusion against the state.

It is common for Iranians who are vocal opponents of the Islamic Republic to be arrested on trumped-up or entirely fabricated charges and deprived of a fair trial. Nasrin’s story is emblematic of the many untold stories of so many members of Iranian civil society — especially women who desire a more free and democratic way of life in their home country.

For Marcia Ross, the producer of the documentary, the key message “Nasrin” sends is a sense of “common humanity” that unites people regardless of where they live.

“It was important for me to show that we are all people,” Ross told Timcast. “In every country, the people aren’t the government. Are some people? Yes. But the vast majority of people are not the government. They are people just like me, with their little houses, with their gardens and their children and their parents trying to make a living and get by. And Nasrin is that person with her friends and a mother who takes her son to school, and all the things that we recognize just like in our own lives. And I think that really was everything for me.”

She added: “For me, this movie was like ‘Handmaid’s Tale’ meets ‘RBG’ [a 2018 documentary about Ruth Bader Ginsberg]. What happens in a country where your human rights are basically ripped and taken away from you? What can happen to you?”

Ross detailed how she and her husband Jeff Kaufman, who directed “Nasrin,” came to create this documentary, which has gained international attention.

As a human rights advocate by nature, Ross felt compelled after watching Kaufman’s documentary “Education Under Fire” around the time they met in 2012. She said the film, which examines the persecution of members of the Baha’i faith in Iran, “stuck” with her. It also happened that around that same time, they came across Sotoudeh because of her work defending Bahai’s in Iran.

“Here was this Muslim woman defending people who are so persecuted by the government in Iran and with the knowledge, of course, that she could be persecuted for what she does and for which she is persecuted today,” Ross said. “I was really taken with this idea of Nasrin’s desire to make a difference in a society that would benefit her children and other women’s children and other women, potentially at a great cost to herself, which thematically has been something that’s been in every one of our films.”

Ross said her husband had been interested in Iranian culture for many years prior to their work on “Nasrin” and several other films that center on Iran: “It’s such a rich culture with a long, extraordinary history, particularly progressive with regards to women in the past.” Kaufman’s interest in the country first began when he was making films that countered the stereotypes surrounding people in Iran and the Muslim faith for Amnesty International.

Ross also referenced “The State of Marriage,” (2015) a film by Kaufman and Ross about several small-town Vermont lawyers — “women who really changed the world because they came up with the first legal arguments that they wanted the United States to have a civil union and same-sex benefits for married couples,” she said. “One of the things I felt strongly about in making the film was not just the sacrifice of the women for their own professional careers, but potentially the threats to their lives, which they got a lot of, and which obviously Nasrin does. And I really began to think about what history is and how history is often written by the men and men often write the women’s roles out of history. They don’t really tell the women’s story as it should be told. They’re sort of marginalized in the story with the men taking the credit for so much.”

Ross saw parallels in the civil rights fight the women in “State of Marriage” took on in the United States and the battle Sotoudeh continues to fight in Iran. Because Nasrin is such an inspirational figure, the film gave off multiple messages.

“I think another really big message for the film was that as we’re going back to this idea of our common humanity, that Iran is a physically beautiful country with a rich cultural history,” Ross said. “And we felt it was often misunderstood. People that are Muslim are demonized, particularly [now] more than ever. And so a big message of the film is to bring the totality in front of people to really see the country and the life and all of it through the eyes of this one woman activist.”

Ross said one of the most notable aspects of Sotoudeh’s personality was her selflessness.

“It was really important for Nasrin that the film not be about her,” she said. “She wanted it to be about this portrait of this community, activists and attorneys and other human rights defenders which she’s a big part of. The women’s rights movement in Iran, despite what we see with so much oppression on this side of the United States viewing it, the women of Iran are universally a pretty brave bunch of progressive women who have fought long and hard for their rights when they’ve been taken away, and given, and taken away again. But they’ve been really unrelenting.”

The film also showed Iran in a way that differs common portrayals in the media. Ross and her husband held an initial private screening for close friends including several Iranians.

“The Iranian people were sitting there weeping because of what we were showing of this country that they can’t ever go back to because they would be arrested,” Ross said. “And my friends were like, ‘I didn’t know about this woman, she’s amazing.'”

She said those who had never been to Iran were blown away by what they saw geographically and aesthetically. “Wow, look at Iran,” she recalled one of their friends saying. Another said, “There’s snow there. You know, it’s not like a bombed-out desert.”

Often, the media provides a singular lens through which people are able to view a nation and does not provide an accurate look into certain aspects of a country’s civil society and geography.

“Americans don’t know about Iran,” Ross said. “They don’t know the Caspian Sea and the beautiful mountains and the vibrant culture in the bazaar. And I think something we talked a lot about … [was] making a film for people who really knew Iran. … But for people who knew nothing about Iran, we wanted to invite them into another way to look at the country. Iran’s a really beautiful place. And we wanted to both show its beauty and the common humanity, that people are alike everywhere.”

Despite the torture, obstacles, and pain she endured, Sotoudeh’s spirit never once broke. A great factor in this was also her husband Reza’s unconditional support for his wife.

“The last couple of hunger strikes that she went on — and the last one almost killed her — she did them because she knew she could get worldwide attention by doing it,” Ross said. “And she was in the news cycle every day. People were terrified that she was going to die. But she did it to bring attention to what was going on to everyone else in the prisons because of COVID. She didn’t do it for herself or to get out of prison. She did it because it created a lot of attention and people saying, ‘Oh my God, what is going on in that prison that that woman has to do this?”

Ross added: “Nasrin has a great purpose in life. And she has this purpose that she believes in, and it is more than just a belief. It’s her purpose. And I think it really gets her through a lot of what she’s doing because she keeps her eye on what her purpose is.”

One particular scene in the film really captures the perseverance of the Iranian people. It shows thousands of women marching in the streets at the million signature campaign.

“There are a lot of feminists in that country. And there are a lot of women who really aren’t relenting on trying to get their rights incrementally, in spite of everything and even against incredible odds,” Ross said. “They’re really not giving up. The people are not passive. They have not just surrendered to the oppression. I think people are really beaten down by the regime — particularly women. They have not given up because they have to think of what’s in the future for their children.”

At the end of the day, Ross said the film is about “our common humanity. How we’ve been so disconnected from that and that enters into everything. Whether it’s racism in this country, whether it’s ethnocentricity, or even the politicization of the mask. The idea that you wear a mask isn’t a political statement. It’s because you are concerned about your own health and the well-being of the people in your society.”

She recalled a quote from Gandhi that Sotoudeh employs as a guiding principle: “‘A society is only as great as it takes care of its least fortunate person’ — I have said that myself for years,” Ross said. “You cannot have a great society with people starving and living on the streets.”

View the trailer for “Nasrin” here. 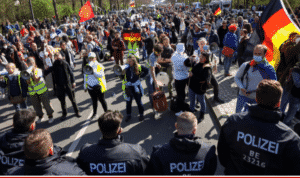