Facebook removed the accounts of an anti-lockdown group in Germany, claiming the group caused “social harm.”

“The people behind this activity used authentic and duplicate accounts to post and amplify violating content, primarily focused on promoting the conspiracy that the German government’s COVID-19 restrictions are part of a larger plan to strip citizens of their freedoms and basic rights,” Nathaniel Gleicher, Facebook head of security policy, told reporters on Thursday.

According to KLFY, “the movement united a disparate mix of those opposing vaccinations, coronavirus deniers and right-wing extremists.”

He told the Neue Osnabrücker Zeitung, “If practically all experts worldwide say the coronavirus is dangerous and vaccination helps, then who actually has the right to say, ‘Actually, I’m smarter than that’?”

He added: “To me, that is an almost unbearable level of arrogance.”

“Germany’s domestic intelligence agency has put some Querdenker adherents under surveillance as the movement has become increasingly radicalized and its protests have attracted neo-Nazis and other right-wing extremists,” reports PIX11.

“The action is the first under Facebook’s new policy focused on preventing ‘coordinated social harm,’ which company officials said is an attempt to address content from social media users who work together to spread harmful content and evade platform rules,” per AP News.

The National reports “the company said a key trend it saw was the blurring between authentic public debate and manipulation by foreign and domestic campaigns.”

In addition to Facebook profiles, the Querdenken 711 channel was deleted by YouTube for allegedly violating the platform’s misinformation guidelines. 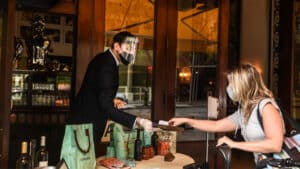