NASCAR driver Brandon Brown says that he is having difficulty finding sponsorships after a viral interview with NBC sparked the “Let’s Go, Brandon” rally cry.

Brown had just won a race and was being interviewed by NBC reporter Kelli Stavast when a chant of “f-ck Joe Biden” broke out.

The reporter falsely claimed that the crowd was chanting “Let’s Go Brandon” in support of Brown — and a new meme was born.

When asked about the viral anti-Biden slogan, Brown said that it has been difficult for him and that he has unwillingly become a divisive figure.

“It got extremely difficult for us. … If you’re a national corporation, that means you sell to all consumers … and unfortunately, when you get dragged into the political arena, people want you to take a side,’” Brown said in an interview with Sports Business Journal.

Brown continued on to say that “it’s hard for a brand to want to attach to somebody who might be kind of divisive in their consumer base. If I’m going to divide Coca-Cola, why would they want to talk to me?”

“So the short answer is it’s been tough to connect with partnerships just because it’s kind of viewed as a ticking time bomb: ‘What is he doing to choose or say and how would that effect our consumer base?’ It’s too much of a risk.’ I understand it on their side but it’s made it really hard to tie everything down,” Brown continued.

The catchphrase has been the subject of added media scrutiny and discussion after a father said the phrase directly to President Joe Biden during a NORAD Santa Tracker call on Christmas Eve. NBC News, the network where it originated, even referred to the phrase as a “right-wing anti-Biden slur” in an article about the incident.

Brown also addressed the slogan in an op-ed published in Newsweek on December 20.

“I have no interest in leading some political fight. I race cars. I am not going to endorse anyone, and I am certainly not going to tell anyone how to vote,” Brown wrote. “But I’m also no longer going to be silent about the situation I find myself in, and why millions of Americans are chanting my name. I hear them, even if Washington does not.”

“To my fans, to NASCAR fans and to everyone who has chanted my name: I dedicate myself this upcoming season to compete hard on the racetrack and to spotlight issues that are important to me and to millions of Americans across the country,” he continued. 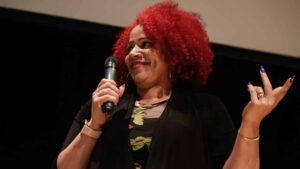