Elon Musk has changed Twitter rules to prohibit the real-time sharing of publicly available flight data and has suspended accounts associated with the practice.

As has been widely reported, Elon Musk took extraordinary steps Wednesday to ban an account that, through its frequent posts about his travel itinerary, had become personally troublesome to the entrepreneur. What has not been as widely reported, however, is that Musk went further — permanently suspending accounts that posted publicly available flight data on anyone from foreign dictators to hurricane chasers. What follows is how an ad-hoc decision to ban one account quickly disrupted resources widely used by hundreds of thousands of users.

Almost in real-time, Musk rewrote Twitter’s rules, targeting an account named ElonJets that had been busily tracking the movements of his private jets. While the account did not, as Musk inadvertently acknowledged, violate Twitter’s moderation policies, Twitter’s new owner decided to remove it from the platform permanently. Jack Sweeney, the man behind the account, was subsequently permanently suspended from his personal account.

Real-time posting of someone else’s location violates doxxing policy, but delayed posting of locations are ok

“Real-time posting of someone else’s location violates doxxing policy, but delayed posting of locations are ok,” Musk tweeted in response to a user questioning why the ElonJets account was removed. There were two problems: Musk explicitly said that Sweeney was allowed to continue operating as he had before Musk took over and the ElonJets account didn’t actually violate any of Twitter’s rules — Twitter’s policy did not prohibit users from posting publicly available information about air traffic.

Musk, who on Nov. 6 declared that his “commitment to free speech extends even to not banning” Sweeney, explained why he reversed course on this decision in a Tweet sent earlier this evening.

My commitment to free speech extends even to not banning the account following my plane, even though that is a direct personal safety risk

According to Musk, a car that was carrying his young son — “lil X” is short for X Æ A-12, Musk’s son who was born in 2020 — was followed by a “crazy stalker” who believed that the elder Musk was inside the vehicle. The stalker allegedly blocked the car from moving and climbed onto its hood.

It’s still unclear whether a police report was filed or how the situation was resolved. Musk did not say whether his family had arrived in Los Angeles by plane or whether the stalker approached them in the vicinity of an airport, but Twitter’s owner did share photos of X Æ A-12’s visit to the social media giant’s headquarters in San Francisco just days before the incident. What is clear is that Musk is holding Sweeney, whose various Twitter accounts track the movement of airplanes and not motorists, personally accountable.

“Legal action is being taken against Sweeney & organizations who supported harm to my family,” he tweeted while saying that he would allow someone’s location to be posted if it were done on a “slightly delayed basis” without elaborating on what amount of delay would be appropriate. If Musk has evidence linking Sweeney’s Twitter accounts to the alleged stalker, it’s unlikely for it to be released in advance of a forthcoming lawsuit.

Last night, car carrying lil X in LA was followed by crazy stalker (thinking it was me), who later blocked car from moving & climbed onto hood.

Legal action is being taken against Sweeney & organizations who supported harm to my family.

Musk, who had implied that the rule was already on the books, was then asked by another user — who realized Musk’s assertion was incorrect — if he would add this newly invented rule to Twitter’s policy pages. And, in confirming that the rule was not an official Twitter policy at that point, Musk indicated with a “yes” that he would add the moderation guidelines.

Meanwhile, Sweeney received an email informing him that his personal account had also been suspended for violating the Twitter rule “against platform manipulation and spam.”

And even as Twitter was working to produce that new policy, netizens began sending lists of accounts that track the flights of various government, non-profit, commercial, and private aircraft.

Some of these users intended to highlight an evident contradiction in Musk’s handling of Sweeney’s most controversial account while allowing other accounts (many of which were also operated by Sweeney) to continue unabated.

Twitter went to work quickly and, within hours, began banning a near-exhaustive list of accounts that track publicly available flight data. Accounts run by Sweeney and others that tracked the jets of Jeff Bezos, Mark Zuckerberg, Russian oligarchs, Vladimir Putin, NASA, weather-watching planes, and even an account that only posted when an aircraft issued an emergency signal were all permanently suspended and were not given a chance to modify the behavior of their programs to adhere to the new rules.

What follows is just a partial list of accounts that were banned following the decision to rewrite Twitter’s policy:

@AirForceTrack – Tracked the movements of the United States Air Force 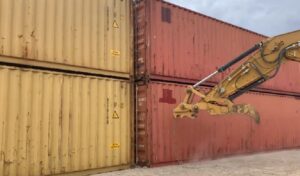