Moulin Rouge! The Musical is the latest Broadway hit to succumb to the Omicron surge of COVID-19 cases in New York City after the show’s Thursday night performance was suddenly canceled with patrons already seated in the theatre.

The abrupt cancellation resulted from a “late in the day positive test result in the company,” a spokesperson for Al Hirschfeld Theatre told the New York Post.

Moulin Rouge! was one of the remaining performances still available in the New York City theatre district. Thursday’s cancellation caused frustrated attendees to vividly remember the pandemic shutdowns that swept the nation in 2020.

Fans are still awaiting news of the scheduled performance on Friday and if it will go ahead as planned.

Many other Broadway shows have canceled performances this week amid the latest surge in COVID-19, but their decisions came well before the audiences were seated.

After the events of Thursday’s cancellation, fans took to social media to share their thoughts and recall the feelings of 2020.

“Wowowow. Moulin Rouge just canceled the performance tonight while we were already sitting in our seats at curtain time due to positive Covid cases Welcome back to March 2020…” Mark Sanderlin shared via Twitter.

COVID in NYC update: tonight’s performance of Moulin Rouge canceled after the entire audience was seated due to “positive COVID tests”. pic.twitter.com/xdkFjL38m1

Amidst the growing concern over the spread of the Omicron variant of COVID-19, New York City seems to be preparing for a wave of new infections and restrictions.

Testing centers are popping up across Manhattan, and people are beginning to return to a more cautious manner of commuting through the Big Apple. New York City has been averaging more than 3,700 new cases a day in the past week and has an average positivity rate of over 3 percent.

It remains to be seen if Broadway will continue to operate or if it will experience a complete closure as this new wave impacts the city. 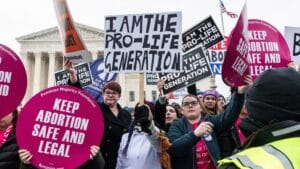 Medication Abortion Available by Mail After Historic Move by FDA