'We Are Confident Ms. Rudolph Will Champion The Fun To Create A World Where Everyone Feels They Belong'

Chocolate candy brand M&M’s revealed an “indefinite pause” to spokescandies in advertisements, announcing a spokesperson would take their place.

Actress and comedian Maya Rudolph will become the brand’s new spokesperson, according to a Monday press release from M&M’s.

“America, let’s talk. In the last year we’ve made some changes to our beloved spokescandies. And we weren’t sure if anyone would even notice. And we definitely didn’t think it would break the internet,” wrote the candy brand. “But now we get it — even a candy’s shoes can be polarizing. Which was the last thing M&M’s wanted since we’re all about bringing people together.”

“Therefore, we have decided to take an indefinite pause from the spokescandies.”

A message from M&M'S. pic.twitter.com/EMucEBTd9o

“In their place we are proud to introduce a spokesperson America can agree on: the beloved Maya Rudolph,” the statement continued. “We are confident Ms. Rudolph will champion the fun to create a world where everyone feels they belong.”

“I’m thrilled to be working with M&M’s,” said Rudolph, who rose to fame starring as a Saturday Night Live cast member from 2000 to 2007. “I am a lifelong lover of the candy and I feel like it’s such an honor to be asked to be part of such a legendary brand’s campaign.”

The SNL alumni will appear in her first M&M’s campaign in the brand’s Super Bowl advertisement on Feb. 12.

Rudolph withheld details about the advertisement though noted the ad would feature “lots of fun,” Today reported.

“It’s a very fun pairing, if I do say so myself,” the actress said of her partnership with M&M’s. “I think little Maya would be thrilled to get to work with M&M’s.”

“So hold on. M&Ms just discontinued their candy animations because people were too offended that one of the candies was wearing boots?” asked one Twitter user in a reaction to the announcement.

“And now Maya Rudolph is the new spokesperson for M&Ms? My God, strong times really do create weak people. WHAT IS EVEN GOING ON?”

Last January, the candy brand revealed their spokescandies would be given a “fresh, modern take” to feature “more nuanced personalities to underscore the importance of self-expression and power of community through storytelling.”

The redesign effort sought to “[create] a world where everyone feels they belong and society is inclusive.”

M&M’s was criticized for redesigning their characters as many fans favored the spokescandies previous designs.

“The green M&M, newly liberated from her white boots, lets loose. She talks social reproduction theory, how patriarchy and capitalism violently reinforce each other, and what a sexy lady M&M says about gender as a construct. Stay with us,” wrote NPR politics correspondent Danielle Kurtzleben in a tweet at the time. 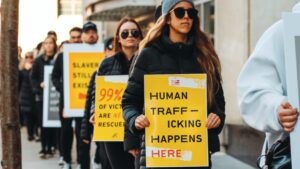