Wednesday night’s show at The Factory in Chesterfield was initially promoted as an all-ages event.

Instead, it ended up being 18+ after the mayor pointed out that the lewd display would be in violation of Chesterfield Code, Article X. Section 210.1690.

The section of the code states that “(a) A person commits the offense of furnishing pornographic material to minors if, knowing of its content and character,he/she:produces, presents, directs, or participates in any performance pornographic for minors that is furnished to a minor knowing that any person viewing such performance is a minor or acting in reckless disregard of the likelihood that a minor is a viewing the performance.”

The “A Drag Queen Christmas” show is traveling around the country — and independent journalist Tayler Hansen documented the mature nature of the performances during the stop in Texas.

In this performance they simulated sex countless times, sexualized a child’s story, including Santa, and had sexual videos playing in the background.

When the host asked a child what his favorite part of the show is he replied “nothing”. pic.twitter.com/rmrkCb5eJ2

“We specifically in the City of Chesterfield have ordinances. Protecting minors and not allow minors to be exposed to certain types of entertainment of a sexual orientation etc.,” Chesterfield Mayor Bob Nation told local station KMOV.

Shira Berkowitz of PROMO, a Missouri-based LGBTQ+ policy and advocacy organization, told the station that she believes children should be allowed to attend such events.

“It’s really disappointing that the mayor feels that drag is not family-friendly,” said Berkowitz. “Don’t go if it bothers you and find another way to celebrate Christmas.”

Berkowitz said that it is a “disappointment” that the town does not welcome drag performers.

“I think Chesterfield deserves it. I think there are plenty of families out there who are raising queer kids,” says Berkowitz. “It’s a disappointment to see Chesterfield sending a message Drag Queens, Drag Kings, Drag performers are not welcomed.”

Mayor Nation had considered shutting the down the event entirely, but it was ultimately allowed to go on with an adult audience.

“Some people they aren’t happy with that,” said Mayor Nation. “They think that we should go further and either prevent the show from going on or check IDs as individuals come in or even worse than that shut it down.”

Still, Mayor Nation said that he would have preferred the event not take place at all.

“This in no way is meant to infringe on their rights and what they consider enjoyment entertainment,” said Nation. “If it were up to me. I would rather it not occur. I mean that in no disrespectful manner.”

Protesters both for and against all-ages drag shows were outside the venue during the event.

Fox 2 reports that protesters against the show carried signs with slogans including “Not in Missouri,” and “Save our children,” while the other side waved rainbow flags and chanted, “Hate has to go.” 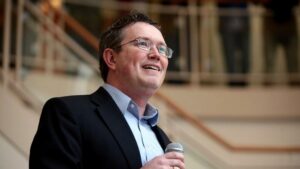