The Minnesota Supreme Court has reversed the third-degree murder conviction of former Minneapolis police officer Mohamed Noor for the 2017 killing of Justine Damond.

Damond, 40, had called 9-1-1 to report a possible assault taking place in the alley behind her home on the city’s southwest side. She had moved from Australia and was getting ready to marry her American fiancé.

When Officer Noor and his partner arrived, he fatally shot her in the abdomen as she went to approach the squad car.

“Noor testified that he and his partner heard a loud bang on their squad car that startled them, and that he fired “to stop the threat” after he saw his partner’s terrified reaction and a woman appear at his partner’s window raising her arm. His partner testified that he hadn’t yet assessed whether there was a threat himself. Prosecutors noted that Noor hadn’t even determined whether Damond had a weapon before firing,” the Associated Press reported at the time of his conviction.

The Supreme Court did not reverse the second-degree manslaughter conviction, but asserted that the prosecution did not prove he acted with a “depraved mind, without regard for human life,” a qualifier for the murder charge.

“In sum, our precedent confirms that Noor is correct in arguing that a person does not commit depraved-mind murder when the person’s actions are directed at a particular victim,” Chief Justice Lorie Gildea wrote in the case’s opinion.

Noor will likely serve between 41-57 months on the manslaughter conviction when he is resentenced, a Hennepin County Attorney’s Office spokeswoman told NBC News.

Hennepin County Attorney Michael O. Freeman said that he was disappointed in the high court’s decision in a statement.

Noor was a Somali refugee whose “hiring in 2015 was celebrated by Minneapolis leaders eager to diversify the police force in a city that is 64% white,” the Associated Press explained.

At the time of his conviction, the Minnesota-based Somali American Police Association issued a statement saying it believes institutional prejudice “heavily influenced” the court and that the prosecutor had “other motives” when he charged Noor. “Unfortunately it’s a system that seems to work for certain people and not for everybody. And it’s something we need to live with,” Waheid Siraach, a spokesman for the association, said in a statement. 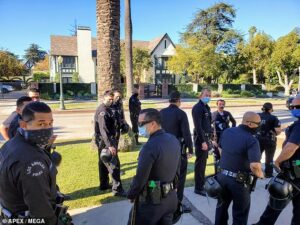