Chappelle has encouraged his fans to continue to support First Avenue

A Minnesota venue canceled Dave Chappelle’s performance hours before he was scheduled to take the stage.

With 1,500 tickets purchased, the comedy show sold out within five minutes. The frenzy prompted Chappelle to add two additional shows at a nearby Minneapolis theater.

LGBTQ activists denounced the theater, First Avenue, for booking Chappelle because of his controversial Netflix special “The Closer” where he discussed his relationship with transgender comedian Daphne Dorman and previous accusations of bigotry.

MnUprising said Chappelle was homophobic and transphobic and that his special caused harm. The group urged the theater to cancel the show with a Change.org petition which received 125 signatures, according to The Daily Mail.

“First Avenue has a duty to protect the community,” MnUprising wrote in the petition, which has since been removed. “Chappelle’s actions uphold violent heteronormative culture and directly violate First Avenue’scode of conduct.”

About 50 protestors gathered outside the venue to chant at the ticket holders who arrived at the theater ahead of the performance. They carried signs advocating for transgender rights and told the attendees not to go support Chappelle. The Minneapolis Star Tribune reported that one man threw an egg at the line of people waiting to get inside.

The theater ultimately acquiesced to the outcry and moved Chappelle’s show to the Varsity Theater, the venue for his July 21 and July 22 appearances.

“To staff, artists, and our community, we hear you and we are sorry,” the theater wrote in its announcement. “We know we must hold ourselves to the highest standards, and we know we let you down. We are not just a black box with people in it, and we understand that First Avenue is not just room, but meaningful beyond our walls.”

The theater’s management noted it has aimed to make its venues “the safest space in the country” and said it has “lost sight” of its goal of honoring “diverse voices and the freedom of artistic expression.”

“We know there are some who will not agree with the decision,” First Avenue’s statement noted. “You are welcome to send feedback.”

MnUprising posted photos on July 21 of chalk graffiti on the theater’s sidewalk a facade that read “TERFS SUCK” and “F— Chappelle.”

“Brave comrades showed up in numbers to confront those who put their money behind transphobia,” the activist organization wrote, calling on the staff at the Varisty Theater to strike in protest of Chappelle’s remaining appearances.

Brave comrades showed up in numbers to confront those who put their money behind transphobia. @VarsityTheater plans to host Chappelle for two more nights. To the employees of the Varsity, we hope you hold back your labor and strike! #fuckyourtransphobia (7/8) pic.twitter.com/0B4tUgZ4Ds

“Every action of fascism happening in so-called Minneapolis shares a root of colonial violence, be it from corporations, the pigs, or the city,” MnUprising wrote in the conclusion of its thread. “To comrades who continue to fight, we love you. Continue to engage in radical action and rage against violence. The time to act is now!”

First Avenue is a well-known Minneapolis venue, noted for being featured in Prince’s film “Purple Rain” in 1984.

The protestors had dispersed by the end of Chappelle’s July 20 show. He called First Avenue’s decision devastating but asked his fans to continue to support the club.

“It’s an important place for our culture,” the comedian said. 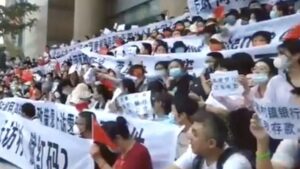