The start of the new year brought changes to legal minimum wage rates in states across the country.

“State law requires that most California workers be paid the minimum wage. Workers paid less than the minimum wage are urged to contact the Labor Commissioner’s Office in their area to file a wage claim,” noted the state’s Department of Industrial Relations.

The federal minimum wage was last increased to $7.25 an hour in July of 2009. Advocates for increased minimum wage says that amount is not insufficient to support Americans in the modern economy.

The American Federation of Labor-Congress of Industrial Organization said the current federal minimum wage “has lost 14.8% of its purchasing power to inflation (in 2018 dollars), and 28.6% less than it was at its peak in terms of purchasing power in 1968.”

“In fact, had the federal minimum wage kept pace with workers’ productivity since 1968 the inflation-adjusted minimum wage would be $24 an hour,” said the AFL-CIO. The organization has argued that the minimum wage across the country should be raised to $15 an hour by 2025 in order to “raise wages of up to 27.3 million workers and lift 1.3 million families out of poverty.”

“Even in a struggling economy, studies have shown that increasing the minimum wages doesn’t damage job growth—in fact, a landmark study found the opposite; employment increased as did consumer spending in the years following the increase,” said the AFL-CIO.

Others have argued that the impact of raising the federal minimum wage would help poor Americans.

In an opinion piece for The Hill in 2021, Jarrett Skorup of the Mackinac Center for Public Policy argued raising the minimum wage could make it more difficult for people living in poverty to find employment, could eliminate entry-level jobs, and could disproportionately hurt small businesses that already compete with major corporations.

In addition to California, the minimum wage in Washington, Massachusetts, and Washington D.C. is $15 or more per hour. Alaska, Arizona, Colorado, Delaware, Illinois, Maine, Maryland, Michigan, Minnesota, Missouri, Nebraska, New Jersey, New Mexico, New York, Ohio, Rhode Island, South Dakota, Vermont, and Virginia all have a minimum wage of more than $10 per hour as of Jan.1.

Notably, Floria and Hawaii both raised their minimum wages in October of 2022 to $11 and $12, respectively.

The Economic Policy Institute also reports that 27 states across the country will raise their local minimum wage requirements. 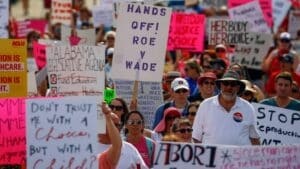