Mark Frerichs, a veteran of the Navy and a civilian contractor who spent nearly a decade in Afghanistan before his capture in January 2020, has been released in what his family has described as a prisoner exchange.

A month before President Trump announced that an agreement had been struck between his administration and the Taliban, Mark Frerichs vanished. For over two years the veteran was held captive by the Taliban-linked Haqqani Network, his confinement lasting through the pullout of American troops under President Biden.

Now, Frerichs, 60, has been released following the Biden Administration agreeing to the release of Bashir Noorzai, a Taliban-allied drug trafficker.

Norzai, who was received in Kabul by an honor guard of Taliban militants who placed garlands of the Afghani national colors around his neck, was once an American intelligence asset who, in 2005, was persuaded to travel to the United States where he was apprehended and thereafter imprisoned at Guantanamo Bay for the next 17 years.

Haji Bishar, last Afghan prisoner in #Guantanamo prison, was freed by efforts of the Islamic Emirate. He was imprisoned in Guantanamo for almost 17 years, and after his liberation, he arrived in #Afghanistan today. pic.twitter.com/fhPWZnYfV5

According to Art Frerichs, Mark’s father, the family has not yet been able to contact the former captive, but they have received a call from President Joe Biden. Biden, for his part, described the decision to exchange that Taliban-aligned drug lord for Frerichs as “difficult.”

“I am so happy to hear that my brother is safe and on his way home to us. Our family has prayed for this each day of the more than 31 months he has been a hostage,” his sister, Charlene Cakora, said in a statement following his release.

Cakora also said that while the exchange was being discussed within upper levels of the Biden Administration, there were a number of dissenting opinions who did not want it to go through. Ultimately, Cakora says that Biden made the right call. “He saved the life of an innocent American veteran,” she said.

In April of 2021, the Associated Press reported on concerns expressed by the Frerichs family who were distraught — first by the Trump administration to offer a peace plan to the Taliban and subsequently by the Biden Administration which announced the withdrawal of American troops unconditioned by the release of American prisoners:

Mark Frerichs, a contractor from Lombard, Illinois, believed held for more than a year by the Taliban-affiliated Haqqani network, was not mentioned in President Joe Biden’s address on Afghanistan last week. Nor was the troop withdrawal, scheduled to be complete by Sept. 11, conditioned on his release from custody, fueling concerns that the U.S. could lose bargaining power to get Frerichs home once its military presence is removed from the country.

Even so, for Frerichs’ family, the failure to make his return a factor in the withdrawal is a source of frustration, as is the fact that the Trump administration signed a peace deal in February 2020, just weeks after Frerichs vanished in Afghanistan while working on engineering projects in the country. 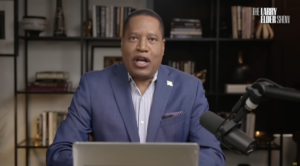 Larry Elder Teases 2024 Presidential Campaign Regardless of Another Trump Run