Larry Elder Teases 2024 Presidential Campaign Regardless of Another Trump Run

The Radio Host Is Reportedly 'Kicking The Tires,' Considering Bid For Higher Office

While speaking on the importance of the nuclear family to Republican donors at the Iowa Faith & Freedom Coalition in Des Moines, Elder said he was “kicking the tires” while considering a Presidential run on the Republican ticket in 2024 regardless of former President Donald Trump’s decides to run again, the Des Moines Register reported.

Elder first threw his hat into the political ring during Democratic Californian Governor Gavin Newsom’s recall effort in 2021. In July of that year, the radio show host announced he would run against the California Governor amongst a growing list of other conservative gubernatorial hopefuls including Republican Californian State Assembly representative Kevin Kiley, Caitlyn Jenner, and former San Diego Mayor Kevin Faulconer.

Larry Elder is considering run for president even if Trump runs https://t.co/bkaT9kuK2M

During the Iowa State Fair in August, Elder claimed he is frequently encouraged to continue his political aspirations for a higher office.

“If I had a nickel for every time somebody said that, maybe I could fund my campaign,” Elder said.

Elder, who dubbed himself “the sage from South Central,” abruptly left his radio program The Larry Elder Show this April after almost 30 years. The Larry Elder Show was hosted by the Salem Radio Network, a division of the Salem Media Group, from 2016 until April. Elder’s decision to leave was reportedly “100% Larry’s decision,” said Salem’s Senior VP of Spoken Word Phil Boyce, according to the Hollywood Reporter.

“Larry is an icon as a radio talk show host and is a powerful voice as a leading black conservative, and we wish him all the best in his future endeavors,” Boyce continued.

In January, Elder announced he would not seek another gubernatorial run in November and instead declared his intention to help local and federal Republican candidates by launching the Elder for America political action committee (PAC). 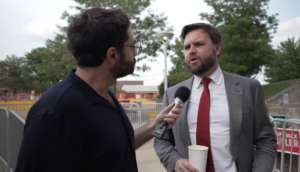