If passed, House Bill 6454 would allow parents, guardians, and licensed medical professionals to all be charged with abuse if “the person knowingly or intentionally consents to, obtains, or assists with a gender transition procedure for a child.”

In Michigan, child abuse in the first degree is a felony punishable by imprisonment for life or any term of years.

“The idea that we would be making potentially life-altering changes to 11-, 12-, 13-, 14-, 15-year-old kids when it is illegal for them to have sex is insane,” LaFave told The Hill after the bill was introduced. “They’re not ‘responsible enough’ to smoke a cigarette until they’re 21.”

According to report, “LaFave said he’s optimistic most Republicans in the state legislature will back the measure. He added that he believes most Michigan Democrats are in ideological agreement with him and the bill’s co-sponsors but would risk damaging their political careers if they supported the measure publicly.”

If passed, Michigan will become the second state in the nation to ban medicinal and surgical gender change treatments for minors.

Alabama has already banned certain procedures and chemicals from being used on youth, including puberty blockers and hormone therapy. However, the law was blocked by a federal judge in May.

The bill states that anyone who “knowingly performs any gender-affirming care on a minor is guilty of a class C felony” carrying a penalty of 10 to 25 years in prison and a maximum fine of $250,000.

The bill would also prohibit “any plastic surgery that feminizes or masculinizes the facial features,” “any placement of chest implants to create feminine breasts,” or “any placement of fat or artificial implants in the gluteal region,” when they are done “for the purpose of changing the body of such individual to correspond to a sex that differs from their biological sex.”

Many of these treatments irreversibly sterilize and/or disfigure the patient.

“How on earth can this even be happening in America?” Greene said during a press conference in September. “It’s hard to understand, but the fact that the medical industry is making billions of dollars on these genital mutilation surgeries on kids is absolutely horrific. These are the things that nightmares are made of.” 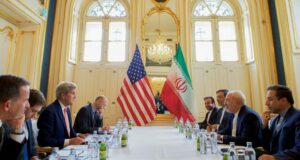 OPINION: The U.S. Would Be Unwise To Re-enter The Iran Deal