Michelle Obama Takes Aim at 'Over Parenting,' Says 'Kids Should Learn How to Live in Anxiety'

O’Brien was discussing how his daughter Neve O’Brien worries too much, similar to himself.

“What you’re doing with Neve is what a lot of us don’t do in our parenting,” Obama said. “Like we don’t help our kids, especially these days, practice their way through their fear, their anxiety.”

“Our generation of parents, we try to prevent them from feeling it at all. You know, that’s the helicopter part of it,” Obama continued.

The former First Lady was on the podcast promoting her new book, The Light We Carry.

“And I think, outside of the kids who are dealing with real serious mental health issues, a lot of the problem is that we are over parenting them. We don’t want them to feel any fear because it makes us feel bad. So we step in and we try to fix it. So they never learned how to practice their way through it to get used to it,” Obama continued.

Obama discussed how her own daughter, Sasha, came to her saying that she was struggling with anxiety.

“So she’s comes to me and she’s like, ‘Mom, I’m feeling anxiety,’ and I’m thinking, whoa, whoa, big word for a sixth grader. I was like, ‘Well, tell me what’s going on. Sit down,’” Obama explained. “And she basically describes the fact that she gets anxious when she hasn’t done her homework. When she has a test, when she’s procrastinated. I was like, ‘Well, you are supposed to have those feelings. You don’t get medication because’ — the immediate response in the culture she was in was, ‘Maybe I need medication.’”

Obama continued, “I was like, ‘No, no, no, no, no. You have to learn. If you don’t wanna feel that kind of anxiety, then go to bed on time, do your homework on time. You have to work your way through that.’”

“Sometimes as parents, because we just don’t want our kids to suffer any failing, we stop those emotions from happening. And the thing that happens is that the first time your kid has to deal with anxiety, they’re 30 years old. They’re outta your house. And you do not want your child to be practicing learning how to deal with their anxiety when they’re in their thirties or in their twenties or after they graduate from college,” Obama said.

“Uncertainty is baked into the human experience. There’s no way around it. You know, life is unfair and it is uncertain. So let’s stop trying to not feel that stuff. And now let’s work on developing our tools, identifying the tools we have to get through this stuff,” she stated. 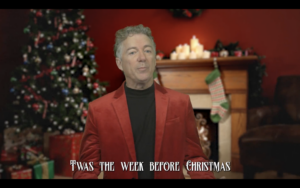