Facebook’s parent company, Meta Platforms, said it will consider removing news from the platform if congress passes legislation that will require tech companies to negotiate payouts with news publishers for distributing their content.

Following negotiations between Senate Majority leader Chuck Schumer (D-N.Y.) and minority leader Mitch McConnell (R-K.y.), the Journalism Competition and Preservation Act (JCPA) will be tied to the 2022 National Defense Authorization Act (NDAA), which must pass by year’s end to fund the military. Including the JCPA all but guarantees its passage after two years of stalled efforts.

Lawmakers say they want the journalism bill to pass to help local news outlets that have been plagued by plummeting revenue.

Since 2004, the number of journalists employed by newspapers has dropped 50 percent, as print advertising revenue cratered. In many communities throughout the U.S., there is not enough revenue to pay local journalists.

More than one-in-five newspapers have closed over the past 15 years, half the counties in the country only have one newspaper, and nearly 200 counties in the U.S. have no newspaper at all, according to a report from the Hussman School of Journalism and Media.

Pew Research found that though newspapers saw a jump in digital subscriptions after the 2016 election of former President Donald Trump, the gains did not translate to the industry’s overall circulation growth. Pew’s data analysis “shows that total weekday circulation for U.S. daily newspapers – both print and digital – fell 8% in 2016, marking the 28th consecutive year of declines.”

The bill is modeled after an Australian law that passed on 2021. The bill will impact tech companies that have at least 50 million U.S-based users or subscribers and either a market cap of $550 billion or at least one billion worldwide monthly users. It also does not cover publishers who employ more than 1,500 full-time employees, which means only the New York Times, Wall Street Journal, and Washington Post would not be eligible for payments.

In an official statement reacting to news of the JCPA being tied to the NDAA, Meta said, “If Congress passes an ill-considered journalism bill as part of national security legislation, we will be forced to consider removing news from our platform altogether rather than submit to government-mandated negotiations that unfairly disregard any value we provide to news outlets through increased traffic and subscriptions.”

Meta argues that the JCPA forces platforms to pay for content its users may not want to see, which it says is not a meaningful source of revenue.

“Put simply: the government creating a cartel-like entity which requires one private company to subsidize other private entities is a terrible precedent for all American businesses,” Meta said.

Despite the fact that the JCPA was first introduced in 2019, and is likely to pass within weeks, sharp divides remain over the spirit and substance of key aspects of the legislation.

Trade associations representing news media have urged congress to add the bill to the NDAA. However, more than two civil liberties groups told congress to scrap the bill, saying it will “create an ill-advised antitrust exemption for publishers and broadcasters” and argued the bill does not require “funds gained through negotiation or arbitration will even be paid to journalists.”

Opponents of the bill say the JCPA violates the First Amendment, as it would force websites to carry third-party content, while also requiring them to pay. They also note the legislation gives the government the right to define what qualifies as “news,” representing an “exploitable opportunity that can shift with prevailing political winds,” according to the Recreate Coalition, an organization that lobbies on behalf of creators.

Supporters of the JCPA say the bill does not violate the First Amendment and would not block the posts of any individual user or require them to pay for content. Supporters also say the bill ensures that Big Tech companies pay for news content provided by local publishers who deserve more compensation for their work.

Opponents of the JCPA argue that the requirement a company maintain less than 1,500 full-time employees undermines the law’s stated goals, as it discourages hiring.

Supporters say that the 1,500 employee requirement won’t impact the industry because only three news organizations are big enough to approach that size (NYT, WSJ, WP).

Opponents of the legislation believe that it will favor payments being made to larger media companies and do so without a requirement the money is actually spent on journalists. They argue JCPA benefits big media organizations and facilitates the very practices that resulted in the decline of local reporting.

Supporters say the JCPA is written to exclusively benefit smaller and local publications. “It severely penalizes Big Tech platforms if they do not negotiate in good faith,” says News Media Alliance, a Washington D.C.-based nonprofit. “By design, the JCPA does not allow large newspapers groups to disproportionately benefit through representation, governance, and allocation of funding.” 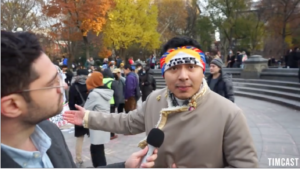