A case of the measles has been identified at Fort McCoy Army Base in Wisconsin, where thousands of Afghan refugees are currently being housed.

According to the Centers for Disease Control (CDC), measles is one of the most contagious viruses and can be spread by coughing, sneezing, and by people breathing contaminated air or touching infected surfaces and then their faces. I

Infected people can spread measles to others from four days before through four days after the rash appears.

“All those who had been in contact with the infected person at base have been isolated, and post-exposure prophylaxis and inoculations are in process,” an internal government email, obtained by Fox News, said.

“The document said that due to the disease’s contagious nature, Fort McCoy was not receiving evacuees ‘at this time’ and was working to procure the necessary vaccines. However, a spokesperson for Task Force McCoy said that the base was still accepting Afghans, of which it can support 13,000,” the report continued.

Fox News noted that “the virus is so contagious that if one person has it, up to 90% of the people close to that person who are not immune will also be infected, and that the virus can live for up to two hours in an airspace even after an infected person leaves the area.”

The CDC reports that Afghanistan has the seventh highest number of measles cases in the world.

The spokesperson told Fox News that “the health of the Afghans at Fort McCoy is a top priority” and that they are being given medical screening and immunizations as needed.

The lack of screening people before their arrival in the US has become a heated topic, as six refugees who arrived at Dulles Airport on August 29 tested positive for COVID-19. Those who arrive here are being offered vaccines, including for COVID-19, at no cost. 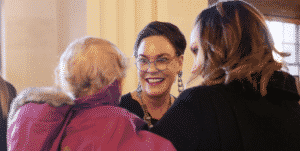 Donald Trump to Back Cheney's Challenger in Wyoming