On Sunday, activist Rose McGowan appeared at a press conference with gubernatorial candidate Larry Elder to offer her endorsement.

“McGowan, a leading figure in the #MeToo movement, accused the wife of Elder’s opponent, Gov. Gavin Newsom, of trying to silence her about movie producer Harvey Weinstein,” reports Business Insider.

She said six months before The New York Times published the allegations against Weinstein, Newsom’s wife, actress and documentary filmmaker Jennifer Siebel Newsom, called on behalf of his lawyer and allegedly bribed her.

While speaking at the press conference, McGowan said that she is no longer a Democrat due to her experience in Hollywood. She added that “she does not agree with Elder, who is a Republican, on every issue, but that he is a ‘better candidate’ and ‘better man’ than Gavin Newsom.”

President Biden will campaign for Newsom in California on Monday. Polls indicate a close race but suggest Newsom may be able to retain his office.

“Donald Trump was defeated last November but Trumpism hasn’t been defeated,” he told the outlet.

Radio host Larry Elder remerged as the leading Republican challenger to Newsom in the recall election. If elected, he would be California’s first black governor.

Last week, he was attacked by a white woman wearing a gorilla mask who threw eggs at the candidate in a Venice neighborhood. The woman, as well as several other people, then tried to physically attack campaign staffers.

Police reported that on the same day, someone fired a pellet gun at Elder and his team outside of a senior center in Hollywood. One person was hit. 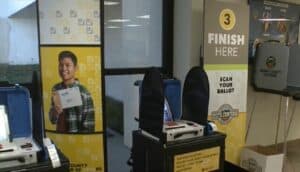