'Since I’ve Been Leader, All We’ve Done Is Been Able To Gain Seats. We Have Not Lost Seats'

House Minority Leader Kevin McCarthy urged Republicans not to “play games,” warning Democrats could decide the House speaker despite being the minority party.

During a Monday night Newsmax appearance, host Sean Spicer asked the House Minority Leader to comment on Republican members pledging to vote against his speakership.

“We got five more weeks,” said the GOP leader in reference to the new Congress set to convene this January. “We’re working through our conference rules today. We want to make sure that everybody has input, but we have to speak as one voice. We will only be successful if we work together or we’ll lose individually.”

“This is very fragile that we are the only stopgap for this Biden administration,” McCarthy added. “And if we don’t do this right, the Democrats can take the majority. If we play games on the floor, the Democrats could end up picking who the speaker is.”

"McCarthy: If GOP Plays Games in Speaker Elections, Dems 'Could End Up Picking Who the Speaker Is'" House Minority Leader Kevin McCarthy (R-CA) said Monday on Newsmax TV's "Spicer & Co." that if Republican members "play games," the Democrats may end up picking the next House…

“We’ll work together to find the best path forward. And I believe at the end of the day, since I’ve been leader, all we’ve done is been able to gain seats. We have not lost seats,” McCarthy ​continued. “We’ll make the American public proud of what we’re able to accomplish and turn this economy back around because we’re going to focus on the people, not on politics.”

“I’m of the opinion that on Jan​. 3, we’ll come together as a conference and elect Kevin McCarthy to be ​S​peaker of the House,” said newly elected chair of the House Oversight Committee Representative James Comer of Kentucky. “I think this is something that is ongoing, and there are certainly five to eight members that have said they’re leaning towards voting no against Kevin McCarthy. They have a right to support whoever they want. They have their opinions​.”

He added: “They have their goals in the conference. Many of them are on my committee. I’m friends with them, but I’m hopeful at the end of the day that we will come together as a conference and elect Kevin​. There’s overwhelming support for Kevin McCarthy in our conference.​”

“In order for us to succeed, we’re going to be forced to work together. That means we’re going to fight it out,” said Greene. “And I’m telling you, I’ve always said I’m not afraid of the civil war in the GOP. I lean into it.”

“Do we want to watch a challenge for Speaker of the House simply because it’s a never-Kevin movement?” Greene said, comparing criticism of McCarthy to the 2016 “Never Trump” movement within the Republican party. “Do we want to see that challenge open the door to Nancy Pelosi handing the gavel to Liz Cheney? Is that what everybody really wants? Because I will not do it.” 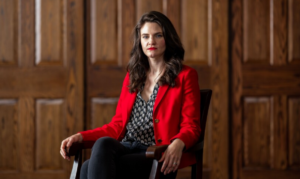