House Minority Leader Kevin McCarthy had urged President Joe Biden to apologize for his comments referring to the “MAGA” ideology as “semi-fascism” ahead of the “Battle for the Soul of the Nation” speech.

Biden had made the comments while speaking at a Democrat fundraiser in Maryland on August 25.

“What we’re seeing now is either the beginning or the death knell of extreme MAGA philosophy,” Biden told Democratic donors. “It’s not just Trump, it’s the entire philosophy that underpins the — I’m going to say something, it’s like semi-fascism.”

In a prebuttal ahead of Biden’s primetime speech from Philadelphia on Thursday, McCarthy said that the “first lines out of his mouth [should] be to apologize for slandering tens of millions of Americans as fascists.”

Rep. Kevin McCarthy calls on President Biden to “apologize for slandering tens of millions of Americans as fascists.” @GOPLeader pic.twitter.com/r9CIveMCEC

McCarthy went on to urge voters to ask themselves if they are better off under “Democrat rule.”

“Democrats control every committee in Congress responsible for our nation’s safety, our prosperity, our education and our government oversight. They are in charge of every federal agency responsible for law enforcement, for drug enforcement, for Homeland Security, for our border security,” he said. “Are you better off? What has two years of one-party Democrat rule in Washington given us?”

The minority leader also named several issues that he believes can be considered an “attack on democracy,” including the Democrats’ immigration policies, the White House “colluding” with Big Tech, and the raid on Trump’s residence at Mar-a-Lago.

“Joe Biden and a politicized Department of Justice launched a raid on the home of his top political rival, Donald Trump,” McCarthy said. “That is an assault on democracy.”

An apology did not come.

Instead, Biden once again took aim at the Americans who voted for his political opponent in the 2020 election, branding them extremists.

“Donald Trump and the MAGA Republicans represent an extremism that threatens the very foundations of our republic,” the president said.

Trump supporters, Biden said, are a “threat” to “the very soul of this country.”

“MAGA forces are determined to take this country backwards, backwards to an America where there is no right to choose, no right to privacy, no right to contraception, no right to marry who you love,” he continued. “They promote authoritarian leaders and they fanned the flames of political violence that are a threat to our personal rights, to the pursuit of justice, the rule of law, the very soul of this country.”

Biden urged people to “do their part” and “speak up, speak out, get engaged, vote, vote, vote!” 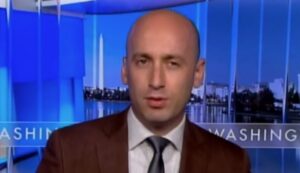