“In one instance, the lawsuit says the district allegedly told students that the phrase ‘Blue Lives Matter’ in support of law enforcement is associated with white supremacy,” reports CBS Boston.

“This is not how public schools that operate with public tax dollars should be conducting themselves,” Nicole Neily, president of Parents Defending Education, said in a statement. “It is fundamentally un-American to discriminate against students or separate students, segregate students, treat them differently, on the basis of race. It’s un-American and also it’s unconstitutional.”

The officials created “racial affinity groups” for students of color and implemented biased speech that shames people into silence, the complaint contends.

“Nearly seven decades of Supreme Court precedent have made two things clear: Public schools cannot segregate students by race, and students do not abandon their First Amendment rights at the schoolhouse gate,” states the complaint. “WPS is flouting both of these principles.”

In March, “Wellesley Public Schools hosted a conversation for students of color about the Atlanta mass shootings that killed eight people, including six Asian American women,” per The Boston Globe.

“This is a safe space for our Asian/Asian-American and Students of Color, *not* for students who identify only as White,” a teacher in the district wrote in an email about the event.

The lawsuit says that this event and the existence of racial affinity groups created segregation in the schools and violated the 14th Amendment, which grants equal protection to all people.

“In the lawsuit, the Wellesley families said their children are wary of expressing opinions about abortion, race, affirmative action, and gender identity. All lodged complaints that students’ speech was policed in class. One alleges their child was assaulted at school after students found out their parent voted Donald Trump,” per The Globe.

The school district has not publicly commented on the lawsuit at this time. 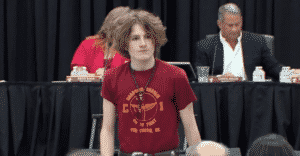