A Maryland homeowner has admitted that they burned down their million dollar house while attempting to combat a snake infestation.

The massive fire in Poolesville was started after the owner attempted to use hot coals to cause smoke to drive the reptiles away.

Montgomery County Fire and Rescue spokesman Pete Piringer said that about 75 firefighters responded to the fire at approximately 10 p.m. on Tuesday.

The hot coals they were using in the basement reportedly got too close to flammable materials, causing the whole house to be engulfed in flames.

In photos of the fire, flames can be seen jumping from the roof and windows on the second story of the house. Photos of the aftermath reveal only a bare skeleton left standing in the morning.

No humans were injured in the fire, but Piringer said that the “status of snakes undetermined.”

According to the Maryland Department of Natural Resources there are only two types of dangerous venomous snakes in the state, the eastern copperhead and the timber rattlesnake. It is currently unclear what type of snake the homeowners were up against. 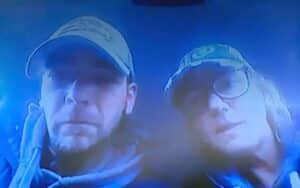