Marjorie Taylor Greene: 'Under Republicans, Not Another Penny Will Go to Ukraine'

'Our country comes first,' she told a crowd in Sioux Falls

“Democrats have ripped our borders wide open. But the only border they care about is Ukraine – not America’s southern border,” she told the crowd. “Under Republicans, not another penny will go to Ukraine.”

The crowd cheered in response.

“Our country comes first,” Greene added. “They don’t care about our border or our people.”

"Under Republicans, not another penny will go to Ukraine" — Marjorie Taylor Greene pic.twitter.com/jT9G7KbwTl

Russia’s Feb. 24 invasion of Ukraine was strongly condemned by the international community.

Between Jan. 24 and Oct. 3, the Biden administration has provided just over $52 billion in aid to Ukraine. The majority of that funding went toward military aid.

“As of October 3, 2022, the value of U.S. bilateral aid commitments to Ukraine represented 0.25 percent of donor GDP,” reports data analysis company Statista. “The U.S. donated the largest amount of all three types of bilateral aid to Ukraine. Generally, U.S. foreign aid to Ukraine has increased since 2015.

The US Embassy in Ukraine says the government will continue to support “Ukraine as it defends its sovereignty, stabilizes its economy, and advances its reform agenda.”

“The trends among Republicans and [the] isolationism course in foreign affairs by Donald Trump and his supporters in Congress are really disturbing for Ukraine,” he said.

“Surely, such statements as far-right congresswoman Marjorie Taylor Greene … made about stopping financial support to Ukraine if Republicans win [the] midterms, do disturb and scare Ukrainians,” the professor continued.

“For the last 8 months since [the] Russian full-scale invasion of Ukraine began, such trends, especially among Republicans in Congress, grew significantly,” added Yali. “So if Republicans win the midterms, the process of voting for financial and military support to Ukraine both in Senate and House of Representatives will at least become much more complicated.”

Ukrainian Parliament member Dmytro Natalukha said Greene’s calls to prioritize spending on the US-Mexico border over support for a foreign country are “short-sighted.”

“If she wants to make America great again, the greatness of the U.S. has always been connected with its active role abroad,” Natalukha said.

Greene has been a vocal opponent of sizeable aid packages created to support Ukraine during its war with Russia. She argued in May that a proposed $40 billion package would largely be distributed to NGOs with connections to American politicians – likening the deal to a “money laundering scheme.”

“Our American tax dollars get abused because they go to these nonprofits and these NGOs and fund all kinds of grants,” she said during an appearance on The Truth with Lisa Boothe. “They just go to things that don’t need to be spent when our own people are suffering.”

“We don’t want this to be happening to innocent people, but yet they totally ignore the fact that, guess what, Ethiopia is having a civil war right now, and there’s thousands of people that have been killed and millions have been displaced,” Greene added. “So it’s such a hypocrisy. It’s not really about saving lives, but it certainly is about Ukraine.” 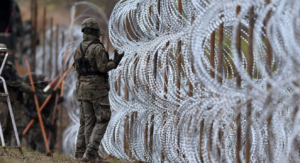