In a video posted to his Facebook page in August, Lt. Col. Stuart Scheller asked for accountability from military leadership and criticized the way the Biden Administration withdrew American forces from Afghanistan.

“I have been fighting for 17 years, and I am willing to throw it all away to say to my senior leaders ‘I demand accountability,’” Scheller said.

The Biden administration withdrew the nation’s military from Afghanistan following the Taliban’s takeover in August.

During an attack on the airport in Kabul, 13 American service members were killed — including 11 members of the United States Marine Corps.

The marine later shared online that he was “relieved for the cause” and “ordered to refrain from posting.” Eventually, he was sent to a military prison for nine days before his court-martial at Camp Lejeune, North Carolina.

He pled guilty on Oct. 14 to six misdemeanor charges, including conduct unbecoming an officer and a gentleman, contempt, disrespect, disobedience, and dereliction of duties.

According to The Independent, “despite a ‘gag order,’ he continued to call for accountability from the US military’s leadership, including Defense Secretary Lloyd Austin and Joint Chiefs Chairman Mark Milley, and announced his intentions to charge the head of US Central Command, General Kenneth McKenzie Jr, with ‘dereliction of duty.’”

Judge Colonel Glen Hines told the court he had watched all four of the 40-year-old marine’s videos. Hines said he “saw a man who appeared to be in pain, frustrated and confused.”

Before handing down his sentences, the judge praised his outstanding service record.

“I don’t think I’ve seen an officer consistently in, as we say, the top three blocks of the Christmas tree. He was on a consistent upward path,” the judge noted before adding that those “who deviate from standards” had to be held accountable.

Hines then ordered Scheller to pay a $5,000 fine and receive an official letter of reprimand for his public critique of the military.

Scheller, a decorated service member, was awarded the Bronze Star amid multiple tours of Afghanistan and Iraq.

The marine addressed the court on Thursday and acknowledge that after the end of his marriage and the loss of a business, he spiraled. He also said, “This is not the America I know.”

“I was never charged with a false official statement. Because everything I have said is true,” he said on Oct. 14, per The Daily Mail. “If the Marine Corps could have charged me with that, they would have. My statements all center around the fact that I do not believe General Officers are held to the same standards as junior leaders.”

“My actions were very public, and at times, very emotional. But I think the emotional rollercoaster that I went through, is what every service member in the country goes through. The only difference is that my experience was very public.”

Outside the courtroom after his sentencing, he told the media, “I feel good about everything I said.” 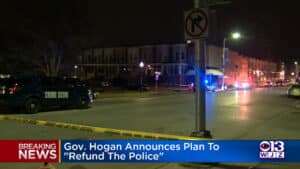