Manchin Responds to White House Comments — 'I'm From West Virginia, Not Where They're From'

The White House released a lengthy statement blasting West Virginia Senator Joe Manchin for announcing that he will not be voting for the Build Back Better legislation on Monday.

Senator Manchin has now responded to their statements, and he is not backing down.

The battle was sparked after Manchin appeared on Fox News Sunday and said that “I cannot vote to continue with this piece of legislation, I just can’t. I tried everything humanly possible; I can’t get there.”

“This is a no on this legislation. I have tried everything I know to do.”

“This is a no on this legislation” — On Fox News Sunday, Manchin announces he won’t vote for the Build Back Better bill. Game over. pic.twitter.com/p0rCu4kl7M

Manchin cited inflation, the federal debt and omicron as reasons for his refusal to continue discussing the bill.

In a statement following the interview, White House Press Secretary Jen Psaki accused Manchin of “a breach of his commitments” for shooting down the social spending package.

The White House press secretary added that they will “not relent” in pressuring Manchin and hope that he will “reverse his position yet again” and “be true to his word.”

According to a report on the interview from The Hill, when asked about the White House comments, Manchin said, “basically they retaliated.”

“I figured they would come back strong,” he said, adding that he was at his “wits end.”

“They figured surely to God we can move one person. We surely can badger and beat one person up. Surely we can get enough protesters to make that person uncomfortable enough that they’ll just say, ‘OK I’ll vote for anything,'” he said.

Manchin has been repeatedly confronted by protesters demanding that he vote for the spending package while out in public.

“Well, guess what? I’m from West Virginia. I’m not from where they’re from and they can just beat the living crap out of people and think they’ll be submissive, period,” Manchin asserted. 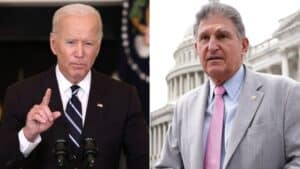 Biden's Build Back Better Bill Appears to Be Dead