The 22-year-old victim was found dead inside the store

A man armed with a machete walked into an Ohio Dollar Tree on New Year’s Day and fatally stabbed a female employee.

The victim, 22-year-old Keris Reibel, was dead inside the store when police arrived on the scene around 4:25 PM on Jan. 1. The weapon was recovered at the scene.

Bethel Bekele, the suspect, left the store before police arrived. He was arrested after law enforcement saw him sitting in a parked car outside the Wyandot County Sheriff’s Office, reports WTOL. The 27-year-old surrendered when officers approach the vehicle.

“While investigating the incident, it was learned Bekele entered the store with the machete, approached Riebel, and struck her numerous times with the machete,” said the Upper Sandusky Police Department on Facebook on Jan. 2.

The motive for the attack is unknown.

“Detectives are currently investigating what, if any, relationship exists between the victim and suspect,” the police department added. The Ohio Bureau of Criminal Investigation responded to the store to assist with processing the crime scene.

Bekele has been charged with murder and is expected to face additional charges as the investigation progresses. He is being held at the  Wood County jail in Bowling Green as the Wyandot County jail did not have a bed available. A court date has not been set.

According to Upper Sandusky Chief of Police Jason Lucas, the last time someone was murdered in the town was in 2001.

In keeping with a national trend documented by the federal Bureau of investigation in 2020, violent crime is on the rise in Ohio. Between 2019 and 2020, violent crime increased in the state by 5.3%, with significantly high numbers of incidents reported in major cities like Toledo and Cleveland.

In total, 820 people were murdered in Ohio in 2020, a 40% increase from the year before. According to data from the Columbus Division of Police and the National Network for Safe Communities, “seventeen active street gangs with a total of around 480 group members are confirmed to be responsible for 36% of those homicides” and another 10% “have suspected gang-involvement.”

Reibel was newly married. Her husband’s family created a GoFundMe to cover the costs of her funeral and grief counseling.

“Keris was a beautiful soul and anyone who met her would say how sweet and kind she was.  Keris just graduated with her bachelors degree in Human Resources and was looking forward to starting her career,” reads a message written to accompany the fundraiser. “Jordan and Keris were also looking forward to having children and most recently a puppy and starting their new lives together.”

“It was ripped apart from the both of them in a matter of seconds,” the family said. 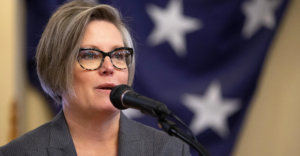 Hobbs Did Not Allow Reporters During Arizona Governor Swearing In Ceremony