Los Angeles County Sheriff's Department Believes Suspect Was Homeless, Had No Prior Relationship To Victim

A man has been arrested in connection with the death of a woman found beaten to death in her home.

Deputies responded to a “burglary/home invasion call” shortly after midnight on Sunday. Authorities found an unresponsive woman suffering blunt head trauma who was later pronounced dead at the scene of her Lancaster, California home, according to the Los Angeles Sheriff’s Department’s statement.

The woman, later identified as Paula Lind, was reportedly a 16-year veteran of the county’s Probation Department and was assigned to Barry J. Nidorf juvenile hall in Sylmar before her death, the AV Times reported.

Authorities say the man, who was believed to be homeless, reportedly acted alone when he broke into the house and assaulted Lind after she arrived home from work. KTLA 5 reported there was no previous relationship between Lind and the man, whose name has not been released as of Wednesday.

Los Angeles County District Attorney’s Office announced the man was charged in a “John Doe” complaint with one count each of murder, assault with intent to commit rape during a residential burglary, first-degree residential burglary and sexual contact with deceased remains, according to Fox 11.

“My thoughts & prayers are with DPO Paula Lind’s family, her partners in the LA County Probation Department, and the Lancaster community during this difficult time. I am so sorry. We must come together as a community LA & stop the senseless violence,” said Child Abuse Prosecutor Jonathan Hatami, who served as the lead prosecutor in the trial of Gabriel Fernandez.

My thoughts & prayers are with DPO Paula Lind’s family, her partners in the LA County Probation Department, and the Lancaster community during this difficult time. 😢 I am so sorry. We must come together as a community LA & stop the senseless violence. https://t.co/JibXjr55TL

“One of our DPO II was found deceased early this morning at her residence in Antelope Valley,” said AFSCME Local 685, who represents deputy probation officers, in a Sunday Facebook post. “The preliminary information is that she may be a victim of homicide. … Meanwhile, please pray for family during this tragic event.”

The union department’s Honor Guard and SEP deputies escorted Lind’s remains in a procession to Los Angeles County Coroner’s Office, the union reported in a follow up Facebook post.

“Our hearts are heavy today,” said county Chief Probation Officer Adolfo Gonzales in a statement. “Our officers work daily to help folks start over and rebuild their lives. Their work helps keep communities safe. It is horrifying to hear that one of our beloved officers passed in this manner. I am hopeful that the individual responsible for this attack will be held accountable and that justice will prevail. Our thoughts and prayers are with the Lind family, loved ones, and friends.”

“She was a public servant that dedicated her life’s work to helping effect positive change in the lives of the probationers she supervised,” said Los Angeles County Supervisor Barger. “The perpetrator responsible for this brutal attack must be held accountable and brought to justice. I will continue to track the outcome of this investigation closely.” 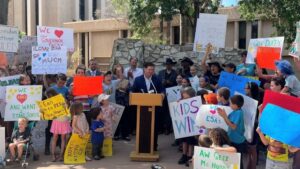