The California man arrested outside Justice Brett Kavanaugh’s Maryland home on June 8 for plotting to assassinate him told a buddy on Discord that he actually wanted to kill three Supreme Court justices.

Nicholas John Roske, 26, told a Discord user that he was “shooting for 3” justices, according to an FBI search warrant affidavit.

Roske was allegedly upset about the leaked Supreme Court opinion that would overturn Roe v. Wade and recent mass shootings.

The July 26 affidavit states that Roske had Google searched for the most “effective place to stab someone” and “quietest semi auto rifle.” Other searches included, “Reagan assassination attempt,” “assassin skills,” “assassin equipment,” “assassinations,” “supreme court,” “how to be stealthy,” “gun lubricant.”

Roske also discussed his plans with an unnamed user on Discord.

“Two dead judges ain’t gonna do nothing,” an unnamed user on Discord sent in a message to Roske, according to the affidavit obtained by the Washington Examiner. “You would die before you killed them all.”

Roske replied that he “could get at least one, which would change the votes for decades to come, and I am shooting for 3.” He did not specify which three. 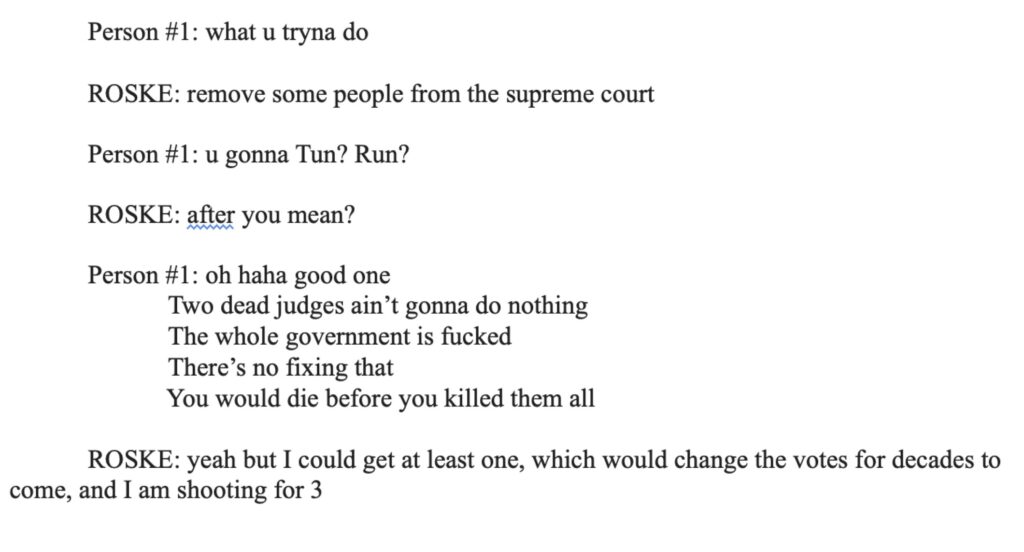 The Examiner reports that on May 10, Roske had also went to the subreddit “r/TwoXChromosomes,” which is “intended for women’s perspectives.” He asked in the community, “Would Kavanaugh being removed from the SC help women long term?”

After arriving at Justice Kavanaugh’s home, Roske called the police and reported himself and his intention.

When police arrived at the scene, Roske was found armed with a Glock 17 pistol with two magazines and ammunition, pepper spray, zip ties, a hammer, screwdriver, nail punch, crowbar, pistol light, duct tape, hiking boots, and other tools. He allegedly had planned to break into the justice’s home, kill him, then kill himself.

In the approximately 15 minute call to 9-1-1, Roske said that he had traveled from California to act on his “thoughts.”

“Are you thinking of hurting anyone, including yourself?” the emergency operator asks.

The operator asks if he is armed, which he replies that he is, but it is locked up in a suitcase.

“I need psychiatric help,” Roske says. He admitted that he has been “hospitalized multiple times.”

He explained that he was turning himself in because he did not believe that he could get away with it.

The Department of Justice has charged Roske with attempting or threatening to kidnap or murder a federal judge.