Mall Of America Sued by Family of Child Thrown Over Railing

In 2019, a man threw a five-year-old boy over the side of mall's third story balcony.

The parents of a boy who was thrown from a third-floor balcony have filed a lawsuit against the Mall of America.

In April of 2019, a five-year-old boy was visiting the famous shopping mall with his mother when a stranger, Emmanuel Aranda, launched him over the railing. The boy, identified only as Landen, fell three stories — roughly 40 feet — before hitting the ground. He was brought to Children’s Minnesota Hospital in Minneapolis where his life-threatening illnesses were treated.

Emmanuel Deshawn Aranda, 24 is charged with Attempted Homicide for allegedly throwing or pushing a 5yo from the third floor of #mallofamerica The child fell to the first floor, and is said to have suffered significant injuries pic.twitter.com/9PUet4rC4N

“The lawsuit accuses the mall and its security force of failing to protect Landen against Emmanuel Aranda,” says KARE11. “Documents describe a ‘duty to protect the mall’s guests against reasonably foreseeable criminal activity.’ Family attorneys allege that the mall and its security detail knew about Aranda and his violent tendencies due to ‘his extensive criminal history and violent conduct at the mall.’ The lawsuit states at a minimum, Mall of America should have prevented Aranda from ‘prowling’ at the mall freely without a security officer following him closely.”

Described by KARE11 as “a known and allegedly violent person,” Aranda had been banned from the mall twice before. He interacted with mall security on April 11, the day before he attacked Landon. The Chicago native was 24 years old at the time.

Aranda was found guilty of attempted first-degree murder and sentenced to 19 years in prison.

“Aranda told investigators he went to the Bloomington, Minnesota, mall ‘looking for someone to kill’ after women had rejected his advances” reports Chron.

Representing the family is Mark J. Briol and the firm Briol & Benson. Briol told the court that the family has incurred “more than $1.7 million in medical expenses” while caring for their son’s severe injuries. He also said, “while the child has made remarkable progress, he will face ongoing medical and health challenges, as will his mother, who witnessed the criminal assault.”

The Mall of America said in a statement:

“From the day that this tragic event happened, our concern has been focused on Landen and his well-being. We are thankful for his ongoing and continued recovery. We can’t imagine how traumatic this ordeal has been for Landen, his family, and friends. Legal matters are not unexpected in a situation such as this. It is a process that we will continue to work through and hopefully find resolution for all parties. Our thoughts and best wishes continue to remain with Landen and his family.”

The story caught national attention and sympathy. Over 29,000 people raised more than $1 million on a GoFundMe page set up for Landon. In a November 2019 update, his parents said  that the boy “came home in August with a limp and uneven legs, but has had many sessions of physical therapy and ‘is now walking PERFECTLY with even legs.’”

The update also said that “when asked by his mother how he’s doing, always responds, ‘Mom, I’m healed, you don’t need to ask me anymore.’” 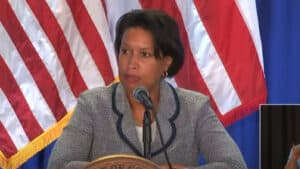 PERMANENT PANDEMIC: DC Imposes Mandatory Indoor Masks for Everyone Over the Age of Two