A shopper at the Mall of America in Minnesota was asked to remove his “Jesus Saves” shirt by security in an incident that was captured on video.

The security guard claimed that the statement on the shirt was “offending people.”

The shopper, Paul Shoro, wore a bright yellow shirt with the word Coexist crossed out. The phrase “Jesus is the only way” was written below.

“Jesus is associated with religion, and it’s offending people,” a security guard is heard telling the man in the viral video, which was filmed on January 7.

I automatically assumed this was overseas, but it’s right here in America. pic.twitter.com/Q79eUCG7xh

The guard tells Shoro that the shirt cannot be worn in the mall, claiming it is “religious soliciting.”

“Again, sir, it is religious soliciting,” he told him. “There is no soliciting allowed on mall property, which is private property.”

“Again, I’m giving you a couple options. You can take the shirt off and you can go to Macy’s and you can do your shopping,” one of the three guards circling him states. “Or you can leave the mall, OK? Those are your only options right now.”

A spokesman for Mall of America told the Daily Mail that the man was ultimately allowed to remain in the mall and did not have to remove his shirt. The spokesperson also said the shopper had been issued a 24-hour trespass the week before for “soliciting guests.”

“The guest referenced in the video was approached by Mall of America security on January 7, 2023,” the spokesperson said. “One week prior, he was issued a 24-hour trespass for soliciting guests.”

The spokesperson continued, “after a brief interaction, the guest was not required to change his shirt and was allowed to remain at the Mall.”

Following the viral exchange, Shoro, who is from Ethiopia, made a lengthy video discussing what happened.

“The Lord delivered me from the darkness. He anointed me and finally by the time I was in Washington D.C. he said ‘Hey son, I need you to go to Minnesota,'” Shoro says in the video. “I started going to Mall of America and met tens of thousands of people, but they stopped me preaching the gospel.”

“When I was asked to take it off I said I would rather go to jail or die than take off my shirt,” he asserted. 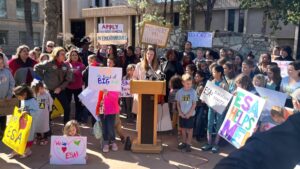