Officials in Australia warned residents “big changes” will be coming in the days ahead as the government implements severe shutdown orders to slow the spread of COVID-19.

“A rejig of the single bubble, banning trips to beach houses and a heavier [Australia Defence Force] presence are among ‘big changes’ to Greater Sydney’s lockdown, with NSW Police given 48 hours to redraft public health orders and get the state back on track,” reports News.com.au.

The news comes as Sydney reports its highest daily case count since the pandemic began.

The seven-day average now stands at four deaths and 350 new infections in the region.

Roughly 10 million people across Australia — about 40% of the country’s population —  are now facing COVID restrictions, .

“I know they’re sick of it, I know they’re angry and I know they want it to stop and for life to get back to where they knew it,” Australian Prime Minister Scott Morrison told reporters in the Capital. “But there can be no short cuts.”

According to the Australian Ministry of Health, 40,000 people have contracted the contagion and 940 people have died.

Just 19% of Australians over age 16 are vaccinated.

Meanwhile, in Sydney, more than 300 army personnel are patrolling the streets to enforce local lockdown orders.

The group is now conducting “door-to-door visits to ensure people who have tested positive are isolating at their homes. They also accompanied police officers patrolling the areas of Sydney where most COVID-19 cases have been recorded.”

“I want to say right up front that we are not a law enforcement agency and that is not what we will be doing,” Brigadier Mick Garraway, leader of the operation, told reporters in Sydney. 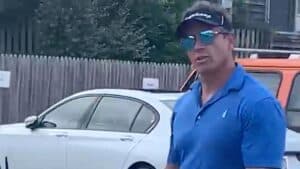 CNN's Chris Cuomo Confronted By Fox News, Asked if Advising His Brother is a Conflict (VIDEO)