CNN's Chris Cuomo Confronted By Fox News, Asked if Advising His Brother is a Conflict (VIDEO)

The governor resigned on Tuesday and will be replaced by Lt. Gov. Kathy Hochul in two weeks, amid his sexual harassment scandal.

The CNN star was at Sag Harbor Yacht Yard in New York on Tuesday riding a speed boat as his brother announced his resignation.

“Have you spoken to your brother today, sir?” the reporter asked.

“Of course I have,” Cuomo replied.

The Fox reporter followed up by asking, “did you advise him to step down?”

Cuomo did not respond to the question.

“I think you have a job, and I’m gonna let you do it,” Cuomo said as he approached his truck.

The CNN host seemed to imply that he could have the reporter arrested for asking him questions.

“In the parking lot, he stopped to sarcastically claim his brother would be down at the Sag Harbor Yacht Yard in ‘five minutes, if you wait around.’ Earlier, off camera, he implied he could have the Fox News reporter arrested by state troopers, stating he ‘called to tell them not to get you,'” Fox News reports. “Then he stepped into a black Ford F-150 SVT pickup with an American flag sticker on the tailgate, without answering whether he believed the women, was continuing to advise the outgoing governor or if there should be an investigation at CNN.”

Cuomo is currently on a “long planned vacation” in the Hamptons amid the scandal swirling around his brother. The CNN host has been widely accused of being unethical for advising his brother amid the sexual harassment allegations, while still hosting his show on the news network.

New York Attorney General Letitia James released a report on the allegations last week and asserted that the governor broke both state and federal laws with his behavior. 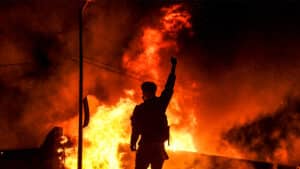 One response to “CNN’s Chris Cuomo Confronted By Fox News, Asked if Advising His Brother is a Conflict (VIDEO)”