Listeriosis in pregnant women can result in 'miscarriage, stillbirth, premature delivery, or life-threatening infection of the newborn' according to the CDC

The Centers for Disease Control and Prevention has announced the source of an outbreak of listeria is a Florida ice cream brand.

While Big Olaf Creamery’s ice cream is only sold in Florida, the outbreak has been reported in several states.

At least one person has died in Illinois and 23 others have become ill due to the outbreak. So far, 22 of the cases resulted in hospitalization.

Consumers have been advised to throw out any Big Olaf Creamery products and to thoroughly clean any surfaces, containers, and utensils that may have come into contact with the ice cream.

The company, which is based in Sarasota, is voluntarily reaching out to retailers and telling them to stop selling their products until further notice.

Pregnant women, newborns, adults ages 65 and older as well as people with compromised immune systems are at the highest risk of becoming seriously sick from listeria.

“Pregnant people typically experience only fever, fatigue, and muscle aches. However, Listeria infections during pregnancy can lead to miscarriage, stillbirth, premature delivery, or life-threatening infection of the newborn,” reports the CDC.

Listeria is a bacteria that spreads from the gut to other parts of the body. The bacteria can cause food poisoning, which presents with diarrhea and fever, and does not require medical treatment.

Symptoms of listeriosis include headache, loss of balance, confusion, stiff neck, fever, and muscle aches. An individual exposed to the virus can become symptomatic on the same day or as many as 70 days after. On average, symptoms appear within two weeks of exposure to contaminated food. The illness is treated with antibiotics.

At least 20 of the sick people said they either lived in Florida or traveled to Florida within four weeks of falling ill.

While the majority of cases associated with this outbreak have been reported in Florida, cases of listeriosis have been detected in Illinois, New York, Pennsylvania, Minnesota, Colorado and Kansas. At least five of the 22 cases involved pregnant women.

The CDC has not yet announced an official recall. 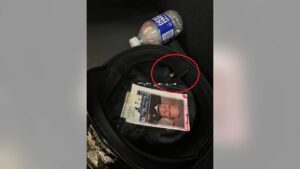