Liberal Supreme Court Justice Stephen Breyer said he disagrees with adding more judges to the Court and spoke about his refusal to retire despite calls from Democrats who want to appoint his successor.

Wallace then asked, “What do you think of those calls?”

“Well, I think that they’re entitled to their opinion,” Breyer responded. “I think they — and not only they understand the political world much better than I, or they understand it pretty well. And there we are. What else you want me to say?”

“They would say you ignored those calls and increased the chances that a Republican Senate will be there to confirm your successor,” Wallace said.

“There are many factors,” Breyer said. “In fact, quite a few. And the role of the court and so forth is one of them and the situation, the institutional considerations are some … I can’t say I’d take anything perfectly into account, but in my own mind I think about those things.”

“So why didn’t you retire?” Wallace asked.

“I didn’t retire because I had decided on balance I wouldn’t retire,” Breyer said. “I don’t intend to die on the court. I don’t think I’ll be there forever.”

He went on to explain that adding justices to the Court would cause Americans to “lose trust” in the institution that is intended to be apolitical. Breyer’s comments were made as President Joe Biden’s Supreme Court commission explores strategies like court-packing for the admitted purpose of shifting the political balance of the Supreme Court.

“What do you think of the idea of increasing the number of justices on the court?” Wallace asked Breyer.

In 2019, the late Supreme Court Justice Ruth Bader Ginsburg likewise warned against packing the Court in an interview with NPR.

“I have heard that there are some people on the Democratic side who would like to increase the number of judges,” Ginsburg said. “I think that was a bad idea when President Franklin Delano Roosevelt tried to pack the court.”

Ginsburg further said that she believes the current number of justices on the Supreme Court is the correct number. She said, “Nine seems to be a good number, and it’s been that way for a long time.”

Echoing comments from Supreme Court Justices from both sides of the political aisle, Ginsburg explained that politicians expanding the Supreme Court to shift its expansion is inherently political and would subsequently undermine the integrity of the institution.

“If anything would make the court appear partisan it would be that — one side saying when we’re in power we’re going to enlarge the number of judges so we’ll have more people who will vote the way we want them to,” she said. “So I am not at all in favor of that solution to what I see as a temporary situation.” 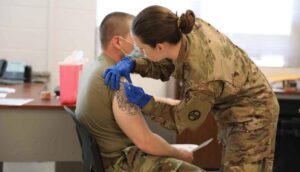