Chinese scientists at the Wuhan Institute of Virology planned to genetically engineer coronaviruses that were more infectious to humans — and then conduct experiments on live bats — about 18 months before the first known COVID-19 cases emerged, according to recently leaked documents.

The researchers also planned to create genetically enhanced bat coronaviruses that were designed to be more infectious to humans and requested $14 million from Defense Advanced Research Projects Agency (DARPA), a U.S. Department of Defense agency.

DARPA rejected to fund the proposal, saying it was “clear that the [it] could have put local communities at risk.” DARPA additionally warned that the researchers had not properly considered the dangers of gain of function research on the bat coronaviruses.

“Papers, confirmed as genuine by a former member of the Trump administration, show they were hoping to introduce ‘human-specific cleavage sites’ to bat coronaviruses which would make it easier for the virus to enter human cells,” The Telegraph reported. “When Covid-19 was first genetically sequenced, scientists were puzzled about how the virus had evolved such a human-specific adaptation at the cleavage site on the spike protein, which is the reason it is so infectious.”

The papers detailing the leaked proposal were released Tuesday by Drastic Research, a group of international scientists investigating the origins of the COVID-19 pandemic.

The group said that the papers suggest that further investigation is warranted into whether the proposed research still went ahead given the assertion that COVID-19 spread from the Wuhan lab.

“Given that we find in this proposal a discussion of the planned introduction of human-specific cleavage sites, a review by the wider scientific community of the plausibility of artificial insertion is warranted,” Drastic said.

The proposal was submitted by British zoologist Peter Daszak of EcoHealth Alliance, a U.S.-based health organization that has used federal money to fund bat coronavirus research at the Wuhan lab. Earlier this month, over 900 pages of documents were obtained by The Intercept through a Freedom of Information Act (FOIA) lawsuit that contain previously undisclosed information about U.S. funded gain-of-function research on bat coronaviruses at the Wuhan Institute of Virology.

“The Intercept has obtained more than 900 pages of documents detailing the work of EcoHealth Alliance, a U.S.-based health organization that used federal money to fund bat coronavirus research at the Chinese laboratory,” the outlet reported. “The trove of documents includes two previously unpublished grant proposals that were funded by the National Institute of Allergy and Infectious Diseases, as well as project updates relating to EcoHealth Alliance’s research, which has been scrutinized amid increased interest in the origins of the pandemic.”

“The bat coronavirus grant provided EcoHealth Alliance with a total of $3.1 million, including $599,000 that the Wuhan Institute of Virology used in part to identify and alter bat coronaviruses likely to infect humans,” The Intercept added. “Even before the pandemic, many scientists were concerned about the potential dangers associated with such experiments. The grant proposal acknowledges some of those dangers: ‘Fieldwork involves the highest risk of exposure to SARS or other CoVs, while working in caves with high bat density overhead and the potential for fecal dust to be inhaled.’”

After reviewing the documents obtained by The Intercept, Dr. Richard Ebright, a molecular biologist at Rutgers University, said, “The materials show that the 2014 and 2019 NIH grants to EcoHealth with subcontracts to WIV funded gain-of-function research as defined in federal policies in effect in 2014-2017 and potential pandemic pathogen enhancement as defined in federal policies in effect in 2017-present. The materials confirm the grants supported the construction — in Wuhan — of novel chimeric SARS-related coronaviruses that combined a spike gene from one coronavirus with genetic information from another coronavirus, and confirmed the resulting viruses could infect human cells.”

Molecular biologist Alina Chan pointed out the negligence of the researchers detailed in the documents obtained by The Intercept.

“In this proposal, they actually point out that they know how risky this work is. They keep talking about people potentially getting bitten — and they kept records of everyone who got bitten,” Chan said. “Does EcoHealth have those records? And if not, how can they possibly rule out a research-related accident?”

After reviewing the documents obtained by Drastic this week, a COVID-19 researcher from the World Health Organization (WHO), who wished to remain anonymous, told The Telegraph that the MERS viruses being researched have fatality rates of over 30 percent.

“The scary part is they were making infectious chimeric MERS viruses,” the source said. “These viruses have a fatality rate [of] over 30 per cent, which is at least an order of magnitude more deadly than Sars-CoV-2. If one of their receptor replacements made MERS spread similarly, while maintaining its lethality, this pandemic would be nearly apocalyptic.” 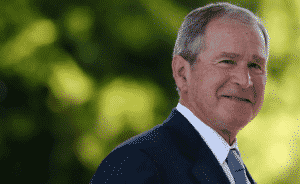 George W. Bush to Hold Fundraiser For Liz Cheney Ahead of 2022 Election