The organizers of the Astroworld Festival in Houston, Texas are facing 11 lawsuits following the mass casualty event on Nov. 5.

Eight people ranging in age from 14 to 27 died while rapper Travis Scott performed. Additionally, several hundred were injured as the crowd surged toward the stage.

Houston Police Chief Troy Finner said he met with Scott, who created the event three years ago, and discussed concerns about the safety of the event. Around 50,000 people were in attendance.

“I asked Travis Scott and his team to work with HPD for all events over the weekend and to be mindful of his team’s social media messaging on any scheduled events,” Finner said in a statement tweeted by the department. “The meeting was brief and respectful, and a chance for me to share my public safety concerns as Chief of Police.”

As part of their investigation, the city’s police and fire departments plan to “review video taken by concert promoter Live Nation, as well as dozens of clips from people at the show that were widely shared on social media.” They will also interview Scott, LiveNation representatives, and concertgoers.

Concert promoter LiveNation said in a statement on Nov. 8 that it had turned over its recordings of the events to law enforcement. It also said it has stopped removing any concert equipment from the grounds so that investigators could review the safety protocols that were in place.

FBI director Christopher Wray acknowledged on Monday that his agency is involved in the investigation and will offer “technical assistance” to HPD.

At a press conference just now, FBI Director Christopher Wray said that while @houstonpolice are leading the #AstroWorld investigation, the FBI is providing "technical assistance". No further details were given.

The 11 lawsuits allege that Scott, Live Nation and others involved in the event did not provide proper safety measures and that “gross negligence” led to the deaths and injuries. Lawyers involved in the suits say the event was poorly planned with too few security guards and medical personnel.

“We are hearing horrific accounts of the terror and helplessness people experienced, the horror of a crushing crowd and the awful trauma of watching people die while trying to save them,” said civil rights attorney Ben Crump, who is representing one of the attendees.

Lawyer Tony Buzbee is representing the family of Axel Acosta, a 21-year-old who died at the event. At a news conference, Buzbee said the young man was suffocated by a “river of people” and then “trampled over … like a piece of trash.”

“The air was literally slowly squeezed out of him,” Buzbee told reporters on Nov. 8.

Travis Scott announced he would refund tickets and canceled his upcoming show in Las Vegas. He has promised to cover the funeral costs of those who died during his show on Nov. 5. He also announced his partnership with the online counseling service BetterHelp which will offer free therapy to the festival’s attendees.

“Meanwhile, more than 10,000 people have signed a petition attempting to block the rapper from performing as a headliner at the Coachella Valley Music & Arts Festival in California next April,” reports The Daily Mail.

Scott has been criticized for carrying on with his performance for at least 30 minutes despite screams from the crowd. His history of violent incidents at concerts has also come under scrutiny.

The causes of death have not been determined by the medical examiner’s office. Michele Arnold, a spokeswoman for the Harris County Institute of Forensic Sciences, told the press the results could take several weeks.

HPD did not immediately respond to a request for comment from Timcast. 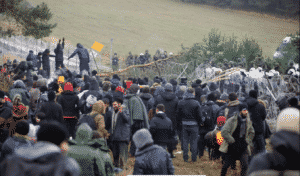