City officials said they expect the death total will rise

At least eight people have died following a night of chaos at Travis Scott’s Astroworld Festival.

Houston Mayor Sylvester Turner confirmed that at least 25 other attendees were transported to the hospital and 13 are still receiving treatment. At least five of those still hospitalized are under the age of 18.

Around 9 P.M. the crowd pushed toward the stage, causing injuries and growing panic. The surge is estimated to have lasted approximately 30 minutes before the show was stopped.

“Everyone in the front was getting crushed,” Billy Nasser, a 24-year-old DJ, told The Houston Chronicle. “The crowd was moving so hard, people were falling over and then tripping over the people on the ground.”

At a press conference on Nov. 6, Houston Fire Chief Samuel Peña called what happened as a “mass casualty incident.”

Peña also noted that while 11 people who were transported to the hospital were in cardiac arrest, they could not confirm the cause of death for the eight fatalities until after the corner’s reports. He said the number of deaths could rise.

“We will be dissecting this thing in its entirety,” Peña said. “I’ve been doing this for 27 years and I have never seen something like this.”

Law enforcement has also confirmed that there were reports of drug spiking incidents during the event.

One concert security guard reported feeling a prick in his neck before falling unconscious. He was revived with Narcan by medical personnel who noted the mark from a possible injection, Chief of Police Troy Finner told the media.

this hurts to watch… It makes me sick to my stomach. Travis Scott is SICK pic.twitter.com/CgaAPHapBT

Rapper Travis Scott, a Houston native, started the festival three years ago. About 50,000 people where in attendance on Nov.5, the first night of the two-day event. Video clips of Scott performing even as the crowd chants “Stop the show!” in response to the injuries were posted to Twitter.

Another video of the crowd chanting “Stop The Show”… what more could they have done to get someone’s attention??? pic.twitter.com/6n5d6qrJE1

On Saturday night, the rapper, whose real name is Jacques Bermon Webster II, said on his Instagram Stories that he was distraught over the incident.

“I just want to send out prayers to the ones that was lost last night,” he said. “We’re actually working right now to identify the families so we can help assist them through this tough time.”

He added: “My fans, like, really mean the world to me and I always just really want to leave them with a positive experience and any time I can make out anything that’s going on, I stop the show and help them get the help they need, you know? I could just never imagine the severity of the situation.”

This was not the first of Scott’s performances to end in harm.

At Astroworld in 2019, a stampede broke out and three people were injured. Scott was arrested in 2017 after he told fans to rush past security and try to get on stage at a concert in Arkansas. At the time, he had already pled guilty to charges related to a similar incident at Lollapalooza in 2015.

The first lawsuit related to the incident was filed against Scott on Nov. 6.

In the petition, Souza’s attorney Steve Kherkher, of the firm Kherkher Garcia LLP, claimed that the “defendants failed to properly plan and conduct the concert in a safe manner. Instead, they consciously ignored the extreme risks of harm to concertgoers, and, in some cases actively encouraged and fomented dangerous behaviors.”

Scott was already facing a lawsuit from Kyle Green, a 27-year-old man who reportedly was paralyzed after he was pushed from a third-story balcony during the rapper’s 2017 performance at Terminal 5 in New York City. The suit, filed in Manhattan Supreme Court, has not yet reached a verdict.

Scott and the event promoter LiveNation canceled the second day of the festival. LiveNation provided the security and the medical personnel at the concert. 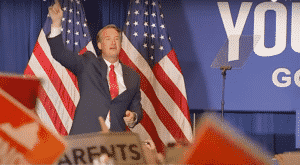 How the Dems Lost The Old Dominion