The former Florida Congressional candidate has asked District Court Judge Laurel Beeler to move forward with her lawsuit under the Racketeer Influenced and Corrupt Organizations (RICO) Act despite efforts from the defendants to have the case against them dismissed.

Loomer, who has described herself as the most banned woman in the world, is seeking $10 billion and damages as well as criminal consequences for the parties involved. She filed an opposition to the motion to dismiss on Dec. 12.

“If you look at the way these big tech companies are operating, it really is like a mafia,” Loomer told Timcast.

Loomer said the revelations made public by a journalist like Matt Taibbi and Jon Scott as part of the Twitter Files publication confirm that “this is a conspiracy, not a conspiracy theory.”

Her RICO lawsuit was initially filed in May of 2022 in the US District Court of Northern California.

Loomer and her legal team argued that “Facebook, Twitter, and other social media companies, including but not limited to Instagram, Google Inc. and YouTube, are members of an enterprise which has used and continues to fraudulently use the pretext of ‘hate speech’ as cover for committing and continuing to commit illegal predicate acts” that violated the RICO Act. The lawsuit contends that Twitter and Facebook made a coordinated effort to specifically target Loomer as both a private citizen and a political candidate as well as the Loomer for Congress campaign, violating her right to free speech.

BREAKING: My legal team @CaliKidJMP and I just filed our opposition to Twitter, Facebook, Jack Dorsey, Mark Zuckerberg, and P & G’s motions to dismiss the RICO lawsuit I recently filed against them.

It’s time to break up the Big Tech Mafia and their organized crime. @elonmusk pic.twitter.com/7E9u7RTMrq

Loomer was one of a group of conservative figures banned from Facebook in 2019 for allegedly violating the platform’s policies regarding “dangerous individuals and organizations.”

Proctor & Gamble is also one of the defendants named in the lawsuit. Loomer says a Facebook Public Policy manager named Josh Althouse confirmed to her team that P&G was one of Facebook’s biggest advertisers and specifically asked the platform to remove her and others.

Loomer and her legal team had not been expecting the Twitter Files to come out during the first two weeks of December.

“But now that Elon Musk has basically confirmed, with the release of these internal files, everything we are claiming in the RICO case, it’s certainly going to make it much more difficult for Twitter and Facebook to deny that they didn’t censor politicians, that they didn’t try to influence the election, and that they weren’t intentionally censoring conservatives,” she said.

Should Beeler deny the defendant’s dismissal request, Loomer’s team will file to amend the lawsuit to include the additional evidence of conspiracy revealed in the Twitter Files.

“What are they going to say? That it is a conspiracy and that these are unfounded claims like they have continued to say?” Loomer posited. “How can they say it is unfounded when the new owner and CEO of Twitter is openly talking about how they were censoring elected officials?”

She argues that her 300,000 followers at the time of her ban from Twitter could have easily reached 1 million by this year – legitimately impacting her reach among constituents while campaigning in 2022 Republican primary in the Eleventh District of Florida, which she lost by less than 5,000 votes.

But for Loomer, who previously worked as an investigative reporter for Breitbart, the RICO lawsuit is not just for her but for “everybody who has been victimized by the big tech mafia.”

“What has happened to me will happen to other people if something isn’t done about this,” she warned.

In her view, the consequences of collusion against certain people or views can feed an increasing effort to “de-person” someone by removing their ability to operate in an increasingly internet-dependent world.

“The free market doesn’t exist any more thanks to the App Store, OK? You can’t just be competitive and have” – Loomer laughed – “free, open competition because if you pose a great enough threat to the App Store, they will delete you.”

She adds that by banning unfavorable people and coordinating with the FBI, social media platforms are also able to deny the public’s right to freedom of association.

However, the blame for rampant collusion and censorship online falls not just at the feet of corporate tech leaders but also on both Democrats and Republicans in the federal government.

Loomer has also not forgotten the way Republicans treated her, even after she won her primary in 2020 after declaring her number one issue was breaking up big tech. (“I ran because I saw the writing on the wall,” she said.) She is wary of elected officials, including Speaker of the House hopeful Kevin McCarthy, who she says are only now speaking out about the danger big tech censorship poses to free speech. She said the party members that allowed her civil rights to be repeatedly “violated” by social media platforms and executives are now using anti-big tech censorship to “grift” for donations.

“This is egregious election interference and the Republican Party has been in on it, they have been aware of it,” Loomer said. “They’ve used me as a punching bag by lying about me and smearing me as a conspiracy theorist, saying that I am all these things that I am not in an attempt to get me to get people on board with the dehumanization of me.”

“These Republicans are f—ing a–holes who sat around and did nothing when people like myself were literally screaming from the rooftops to Congress, begging them to do something so we wouldn’t get to this point,” said Loomer. “So shame on the Republican Party.”

The RICO Act was established in 1970 to establish new penal prohibitions and increased sanctions on those involved in organized crime – initially mafia members – making it a crime to participate in or profit from any association with a criminal organization.

“RICO provides for severer penalties and permits a defendant to be convicted and separately punished for both the underlying crimes that constitute the pattern of racketeering activity and for a substantive violation of RICO,” states the Department of Justice’s Office of Justice Programs.

John Gotti, the head of the Gambino crime family, was convicted on RICO charges in 1992, as were the heads of five New York mafia families in 1986.

Even as the threat of organized crime waned, civil RICO cases are still filed to this day.

“It is about the money but it is also about finding justice. RICO civil suits were filed in cases regarding sexual abuse of olympic gymnasts, lobster embezzlement, Harvey Weinstein, and another may involve scandals associated with the Catholic Church abuses,” reported Forbes in 2018.

Loomer’s RICO lawsuit is just the latest legal effort she has led over the last five years in an effort to set a legal precedent that checks the power platforms like Facebook and Twitter, as well as their executive leadership, have over free discourse in America.

“I’m not in this for myself. I’m in the for my country and for the American people,” she adds. “If we don’t stop big tech and big tech election interference … then we are never going to have a free country.” 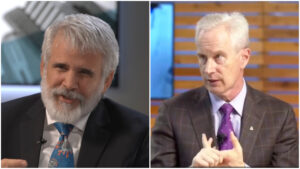