LA Teacher's Union Boss: 'There Is No Such Thing As Learning Loss'

Cecily Myart-Cruz, the head of United Teachers Los Angeles, told Los Angeles Magazine that it doesn’t matter if children missed out on formal education during the pandemic because “there is no such thing as learning loss.”

Myart-Cruz – who is notorious for limiting Zoom classes during the pandemic to a maximum of four hours per day – said, “Our kids didn’t lose anything. It’s OK that our babies may not have learned all their times tables. They learned resilience. They learned survival. They learned critical-thinking skills. They know the difference between a riot and a protest. They know the words insurrection and coup.”

Myart-Cruz has previously said that California Governor Gavin Newsom’s attempt to try to convince teacher’s unions to allow children to go back to school was “a recipe for propagating structural racism.”

Los Angeles Magazine reported, “As much of the rest of the state started bringing teachers and students back to campus full time, Myart-Cruz dug in, waiting until late April to only partly reopen for hybrid, part-time learning. When parents complained, pointing to the low incidence of COVID cases in schools that had fully reopened, Myart-Cruz dismissed their concerns as the product of their unexamined privilege.”

When Los Angeles Magazine asked Myart-Cruz about the potential for schools fully reopening in the fall, she said, “We will be going back to the table for that conversation.” While she claims the main goal “is getting back into schools as safe as possible,” she admits that the decision is also political. “Are there broader issues at play? Yes, there are,” she says. “Education is political. People don’t want to say that, but it is.”

Contrary to Myart-Cruz’s claims, a report by the global consulting firm McKinsey discusses the damage of learning loss, and how it can disproportionately harm minority students. 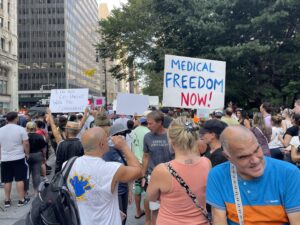 Here’s How New Yorkers Can Fight Back Against Medical Mandates

8 responses to “LA Teacher’s Union Boss: ‘There Is No Such Thing As Learning Loss’”