A Los Angeles news anchor has been fired after going off script and criticizing the station.

KTLA weekend anchor Mark Mester was fired on Thursday after he blasted the station and apologized to viewers for how his bosses handled the departure of his former co-host and “best friend” Lynette Romero.

“I want to start off right now by offering up an apology to you,” Mester said during Saturday’s episode. “What the viewers experienced was rude, it was cruel, it was inappropriate and we are so sorry.”

Romero had reportedly not been given the opportunity to say goodbye to viewers on air. She had been with the station for 24 years.

“We’re going to offer you dignity and grace, which is what this station should’ve done from the beginning,” Mester continued in the unapproved monologue. “I also want to say sorry to Lynette Romero because Lynette, I love you so much, you literally are my best friend. You did not deserve what happened to you.”

Mester continued, “You did not deserve this, it was a mistake, and we hope you can find it in your heart to forgive us.”

Romero had reportedly requested fewer shifts so that she could spend more time with her family. When the request was denied, she took a weekday morning shift at another station.

Instead of being allowed to announce her departure herself, a statement was read by another anchor.

“After nearly 24 years, Lynette Romero, our friend Lynette, has decided to move on from anchoring our weekend morning news,” entertainment reporter Sam Rubin read from a statement written by news director Peter Saiers on September 14, according to a report from the Daily Mail. “KTLA management had hoped she would stay here her entire career, and KTLA worked hard to make that happen.”

Rubin continued, “but Lynette has decided to move to another opportunity elsewhere. Lynette, we wish you luck, we miss you and we thank you for everything you’ve done for KTLA. … On behalf of everyone here, we wish you and your family nothing but the best.”

Saiers had said that Romero was offered the opportunity to do a pre-recorded farewell message, but declined.

“Our industry has a practice of quickly and quietly releasing team members who move to the competition,” Ashley Regan, a producer for KTLA’s “Weekend Morning News” show said in a statement posted to Twitter. “We may not love the practice, but we know not to take it personally.”

After Mester went off script, the Los Angeles Times reports that staffers heard him telling a news director to “shut up” and was yelling obscenities.

The report added that the station’s general manager, Janene Drafs, announced Mester’s firing with a brief speech during a meeting in the newsroom saying, “[Mester] is no longer at KTLA5.”

Mester has already been removed from the roster on KTLA’s website. 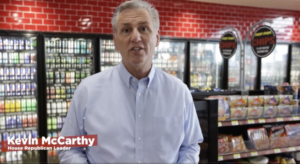