Kroger to Penalize Employees Who Are Not Vaccinated

Kroger Corporation announced that unvaccinated staff would be ineligible for paid sick leave if they catch COVID. If they remain unvaccinated, the company will start charging employees a $50 monthly health insurance surcharge.

According to a report from the Wall Street Journal, the grocery store chain, which employs about 465,000 full- and part-time workers, notified its employees in a memo that Kroger will no longer offer two weeks of paid emergency leave for unvaccinated employees who contract the virus.

Kroger also stated in the memo that it would not change its plan unless otherwise required to do so by local governing officials.

Kroger plans to add a “tax” to unvaccinated managers and non-union employees. The move will require them to pay a $50 monthly surcharge towards company health insurance plans. According to the report, both policy changes will be effective as of Jan. 1, 2022.

The new policy change comes amid pushback against President Biden’s vaccine mandate for private companies. The president’s mandate requires all employees to be fully vaccinated, get tested for COVID-19 weekly, or face thousands of dollars in fines. The mandate and its requirement have been met with fierce legal opposition.

In May, Kroger CEO Rodney McMullen said that he was implementing incentives to ensure his workers got fully vaccinated, including rewarding a $100 cash bonus to each employee who got their vaccination.

“I encourage all employers to lead by example and, where possible, to incentivize their employees. More shots in arms will bring us closer to our normal lives,” said McMullen in a memo to the company in May.

The mandate by Kroger comes after the Occupational Safety and Health Administration (OSHA) ordered employers with 100 or more workers to either confirm that their workers are vaccinated or take weekly COVID tests by Jan. 4, 2022. Kroger, one of the largest employers in the United States, indicates a sentiment by large corporations to submit to the mandate protocols.

OSHA’s mandate has, however, met a plethora of legal action, and it remains unclear if the mandate becomes effective in January.

As a result of these legal battles, General Electric Co. (GE) and Union Pacific Railroad retracted their vaccine requirements, according to statements given to the Wall Street Journal last week.

The nation’s workforce and its employers continue to watch daily as the mandates, requirements,and information evolves. 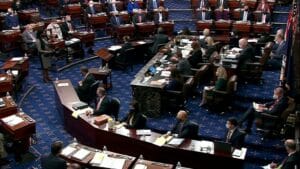