Kentucky’s Democrat Governor Andy Beshear has vetoed the “Save Women’s Sports Act,” which would have forced students to play on teams meant for their biological sex.

Gov. Beshear’s veto is expected to be overridden by the Republican-majority state legislature next week.

Senate Bill 83 requires schools to designate all athletic teams, activities, and sports for students in grades six through twelve as “Boys,” “Coed,” or “Girls.”

The legislation further states, “Neither the state board, nor any agency designated by the state board to manage interscholastic athletics, nor any school district, nor any member school shall entertain a complaint, open an investigation, or take any other adverse action against a school for maintaining separate interscholastic or intramural athletic teams, activities, or sports for students of the female sex.”

In a statement about the bill, Gov. Beshear said that it “most likely” violates the US Constitution’s equal protection rights because it “discriminates against transgender children seeking to participate in girls’ or women’s sports.”

The Human Rights Campaign, an LGBTQ organization, praised Gov. Beshear for vetoing the legislation, but acknowledged that the House and Senate could override the veto with a simple majority vote in both chambers.

Fairness Campaign Executive Director Chris Hartman blasted the bill as “bullying,” as he says there is only one openly transgender student athlete in the state.

“I applaud Governor Beshear for doing the right thing today and vetoing a harmful piece of legislation that would deprive transgender girls and young women of the opportunity to grow and learn from being on a team, simply because of who they are,” said Hartman. “From the start, this bill has been more about fear than fairness. In Kentucky’s entire school system, there is only one openly transgender girl we know playing on a school sports team. That student started her school’s field hockey team, recruited all of the other team members, and just wants the opportunity to play with her friends during her eighth-grade year. But rather than tackle any of the state’s real issues, legislators decided to use their time and power to bully this student and others like her. While we are pleased with the Governor’s actions today, the rights of transgender people in Kentucky are still in danger. We urge state lawmakers to follow the lead of Governor Beshear and show compassion to transgender people in our commonwealth by not overriding this veto.”

“Kentuckians overwhelmingly support this commonsense bill, but unfortunately, Gov. Beshear chose to side with his woke political base instead of Kentucky’s female athletes. Biology matters, especially in sports, and we look forward to the General Assembly overriding Beshear’s tone-deaf veto so that women’s sports in Kentucky can be protected,” Walls said in a statement. 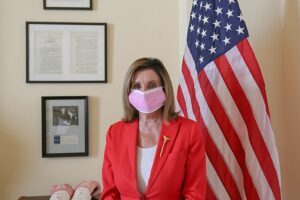 Speaker of the House Nancy Pelosi Tests Positive for COVID-19