Kari Lake Denounces Critics Referring To Her As 'Election Denier'

'It's A Crock Of BS. Every One Of You Knows It. We Have Our Freedom Of Speech, And We're Not Going To Relinquish It To A Bunch Of Fake News Propagandists'

On Oct. 18, Republican Arizona Gubernatorial candidate Kari Lake took reporters to task after critics and legacy media referred to her as an “election denier.”

Lake took questions from reporters on the ninth stop of her “Ask Me Anything Tour” with Black Voices for Kari in Phoenix, Arizona Tuesday night. MAAP Real Talk Show’s George Nemeh asked the Gubernatorial candidate about critics referring to her as an “election denier” regarding her previous comments surrounding the 2020 Presidential election.

“I’m actually shocked you asked that question, George,” Lake replied before asking for an off-camera person named Anthony. The Gubernatorial candidate asked Anthony, who produced a folder filled with paperwork, if he was a was a journalist. The off-screen Anthony replied he was not a journalist before Lake rebutted, “Well, you did better research than half of these people,” motioning towards the reporters.

“So it’s okay for Democrats to question elections but it’s not okay for Republicans?” Lake asked the reporters. “It’s a crock of BS. Every one of you knows it. We have our freedom of speech, and we’re not going to relinquish it to a bunch of fake news propagandists.”

Lake said if reporters were interested in a copy of the headlines and tweets used as examples, the off-screen Anthony could “help [them] learn how to be journalists.”

“Look it up, it’s been happening a long time. Since 2000 people have questioned the legitimacy of our elections,” Lake continued. “All we’re asking is that in the future we don’t have that have to happen anymore.”

“When I’m Governor we’re gonna make sure we have honest elections. We want the Democrats and the Independents and the Republicans to all know that their vote counted. We want fair, honest, and transparent elections and we’re going to deliver that for the people.”

“If you’re gonna start throwing around terms like ‘election denier’ let’s remember who the other election deniers were — Hillary Clinton and all the Democrats.”

Lake is running against Democratic challenger and current Arizona Secretary of State Katie Hobbs in the Gubernatorial Midterm election this November. 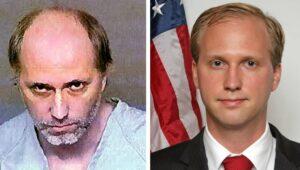