Adding intrigue, Balenciaga has broken with couture standards and will not release the collection under its luxury brand. Gap, the well-known mass-market retailer, will instead sell the collection from its platform.

Yeezy Gap Engineered by Balenciaga is expected to be globally available in June of 2022.

Gap announced the collaboration on Jan. 7.

“This first of its kind launch sees Ye’s peerless vision bringing together the most influential designer of his generation, Demna, with Iconic American brand, Gap,” the company said.

The brand has worked with the rapper previously.

In 2020, Ye signed a ten-year creative deal with the brand, which became Yeezey Gap. Two items have been released under this brand so far.

The first item, a bright blue nylon puffer jacket, was released during the summer and cost $200. The Round Jacket sold out within minutes and crashed Gap’s website.

“Now, the coats are being floated on resale sites for more than $1,000, and the items haven’t even shipped yet,” noted CNBC.

The second item was a $90 hoodie that was only available on Gap’s website. When it was released in six colors on Sept. 29, customers were directed into a virtual waiting room and asked to complete a survey of personal information before they were able to select their size.

“Gap is said to be paying royalties and potential equity to Kanye’s Yeezy brand based on the sales performance of the collaboration,” per Yahoo! Life.

Wells Fargo analysts predicted in June of 2021 that Yeezy Gap could bring in almost $1 billion in sales next year. According to a survey of Gap customers, 64% planned to buy from the collection. The analysts predict Ye’s brand collaborative brand could increase sales for Gap by $990 million during 2022.

West worked at a Gap in his native Chicago and rapped about his experience in his 2009 song “Spaceship.”

Gap says the line with Balenciaga “is a new creative exploration within the Yeezy Gap Universe.”

Balenciaga is known for its attention-grabbing design and marketing strategies. The luxury fashion line has frequently collaborated with popular consumer brands, including two collaborations with Crocs.

Balenciaga’s Russian-born creative director, who goes by his first name Demna, also made the brand one of the first to break into the metaverse. Balenciaga X Fortnite was one of the lines of cyber fashion released to gamers.

Denma has relied on pop culture to market his work. He recently launched Balenciaga’s autumn/winter 2021 collection through an episode of the long-running television show, The Simpson.

“Gap’s got nothing to lose and everything to gain with the launch of Yeezy Gap Engineered by Balenciaga,” reports Forbes. “Ye does too, since his pace of new Yeezy Gap launches may be a little slow for CEO Sonia Syngal’s expectations. As for Balenciaga, it’s totally unexpected for a luxury brand to step down from its perch and enter the mass market, which is why this collaboration is so newsworthy.”

Demna and Kanye West previously collaborated during the release of the rapper’s tenth studio album, Donda. Demna served as the creative director for the album’s debut listening event at Mercedes-Benz Stadium in Atlanta. He also designed merchandise, reportedly making $7 million.

Demna told Vogue that Ye made him “come out of [his] comfort zone and be a better designer.”

“There are very few people that I know, especially of Ye’s caliber, who really understand my work so well,” Demna said. “There’s no ego when we collaborate, just a mutual drive to evolve and do something great and new.” 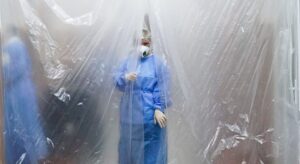