The United States confirmed a record-setting 1.3 million new cases of COVID this week as the Omicron-variant spreads across all 50 states and clogs health care systems nationwide.

It is the highest daily total for any nation since the start of the pandemic.

“It also represents the highest daily total recorded for any country in the world, according to Reuters, with the U.S. recording a total of 61,490,917 cases since the Covid-19 pandemic began as of Monday, according to NBC News’ data. The seven-day average for cases in the U.S. also reached its highest point yet on Monday, hitting an average of 740,594 cases per day, with 24 states reporting their highest 7-day average of all time,” adds the outlet.

The data comes as the Biden administration struggles to clarify its messaging on the pandemic.

The Director of the CDC Dr. Rochelle Walensky made national headlines over the weekend when she confirmed that 75% of COVID-fatalities occurred in people with at least four comorbidities. 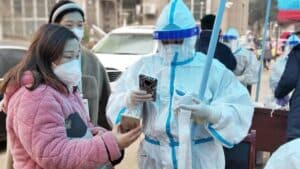 Another City in China Has Entered a Full Lockdown Over COVID