An Indiana judge has issued a preliminary injunction requiring John R. Wooden Middle School to allow a transgender student to use their preferred bathroom.

The lawsuit was filed by the American Civil Liberties Union of Indiana and Indiana Legal Services against the Metropolitan School District of Martinsville in December 2021, on behalf of the 7th grade student who identifies as male.

The student, who reportedly came out as transgender at just eight years old, had been told by the school that they could use the single-sex restroom located in the nurse’s office instead of the girl’s room. The lawsuit says that this was not convenient for the student, identified only as A.C., and they began to experience “anxiety, depression and stigmatization.”

The student’s stepfather reportedly called the school to complain, but the wouldn’t budge and said A.C. must continue using the clinic’s restroom.

“He is under the care of physicians at the Gender Health Clinic at Riley Children’s Hospital where he is being given medication for menstrual suppression; and he hopes and expects to be taking male hormones in the near future,” the judge’s order notes.

The school district has argued that Title IX “expressly allows institutions to provide separate restroom facilities on the basis of sex.”

The student’s legal team argued that the school is violating Title IX by requiring A.C. to use a bathroom that does not conform with their “gender identity” because it “punishes them for gender non-conformance.”

“The overwhelming majority of federal courts – including the Court of Appeals for the Seventh Circuit – have recently examined transgender education-discrimination claims under Title IX and concluded that preventing a transgender student from using a school restroom consistent with the student’s gender identity violates Title IX,” Welton Pratt wrote. “This Court concurs.”

Megan Stuart, case attorney for Indiana Legal Services, said in a statement that she was happy with the outcome, writing “his worries should be about things like homework and friendships, not whether he can use a restroom.”

The ACLU is also celebrating the decision.

“The law is clear: denying transgender students their right to use the correct restroom is discrimination,” Stevie Pactor, an ACLU of Indiana Attorney, said. “We hope that public schools and legislators will take notice and forgo future challenges by providing equal treatment to all students.”

A.C.’s case is one of three lawsuits recently filed by the ACLU of Indiana against several public-school districts in the state. 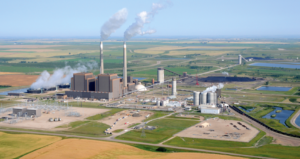 The Largest Power Plant in North Dakota Has Been Sold